It seems easiest to begin at the beginning…

My cohort’s MBA graduation was on April 17. The MBA was a big reason I had stayed in Gainesville and continued to look for work after I was laid off in 2009. It seemed easiest to continue living and working in Gainesville since I had to be in town for classes anyway. I was planning to eventually leave my job and take some time to work on my own projects, but my timeline moved up by a month after I finished the MBA.

I initially planned to quit my job at the end of May, and then I just sort of decided that it was time to move on and I put in my notice on April 18 (the day after graduation). This was about as close to spontaneous as I get: it took me the first two weeks of April to decide to hang it up earlier than I initially planned. Of course, I’d been considering a change for more than six months, so maybe “spontaneous” isn’t the right word.

I was going to play some poker online in May (there’s a pretty big online poker series on PokerStars every Spring), but Uncle Sam says I (and the rest of the US) am not allowed to do that. I had to find something else to do with my time, so I started off by setting up some meetings to make sure I had my head on straight. I met with some old co-workers to get perspective and help me plan my time away from the rat race, and I met with our old CFO to get some perspective on the bigger picture of my career. All of these meetings were basically designed to help me figure out how to cram maximum productivity into my time out of work.

I was planning to be out of work for about a year, and I felt like I really needed to make it count. There aren’t many people who have the opportunity to just walk away from a job and sort of do whatever comes to mind. I felt like this opportunity was a privilege and I didn’t want to squander it, so I was trying to figure out how to get myself involved in the maximum number of projects to take advantage of all my free time. Ironically, my meeting with our old CFO made me see things much differently and I quickly decided I needed to find a balance between productivity and recreation. I realized I have the rest of my life to focus on my career and productivity, but I may never have another opportunity to just do what I want to do.

I should pause here to say that my situation was very, very unique. I’m single, 31 and living in Gainesville, FL, which has a pretty low cost of living. I have a mortgage, but I also have two roommates who pay rent and split the utilities with me. I own my car. Ultimately, I have very few living expenses and very little debt. I do have student loans, but they’re not going anywhere soon, so why stress about them now? A little money goes a long way in Gainesville, and that’s a big reason I was able to walk away without having a fortune in the bank.

Anyway, I decided I needed a good mix of productivity and recreation, so I started thinking of ways I could be productive and spend time doing fun things that I normally couldn’t do. I should do some traveling and visit some friends. I should spend time with my family. I should try to do some good with my time. I decided to start learning to cook, and started bugging friends to teach me stuff. I was able to learn the basics of cooking and baking, so that felt productive.

The Game Theory and Poker book

I was already working on a Game Theory and Poker book that Vanessa and I began in January 2010, and I spent quite a bit of 2011 working on that. This project has been moving really, really slowly relative to our initial expectations because the material is just so difficult to write. We’re trying to teach our strategy for playing poker tournaments, but we’re really trying to build a framework to help others learn how to adjust their game over time to maximize their chances of winning tournaments regardless of the current strategic landscape. I usually describe it as a textbook on poker: it’s very interesting, useful material, but it’s also dense and everything we write requires significant discussion and time; we’re writing about things that haven’t been written about before, and we’re creating our own models and theories as we go. 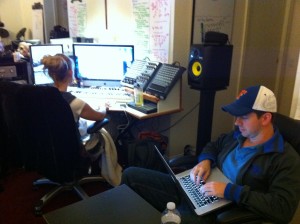 Vanessa and me writing the Game Theory and Poker book

June was a rough month of highs and lows. The month began with my brother’s high school graduation, which was obviously a really happy event. He was heading straight to college, so it was more of a speed bump on his educational path than anything else.

I also attended two funerals, both for immediate family members. Earlier this year, my paternal grandmother passed away at 94. We had a service for her in Baltimore, but I ended up driving from Gainesville to Orlando to fly direct. I left Orlando on Thursday afternoon (the 16th), the service was in Baltimore Friday morning, and I was on a plane back to Orlando on Friday night. My friends’ wedding was on Saturday (the 18th) in Orlando, and I didn’t want to miss it. In hindsight, I’m really thankful that my friends’ wedding happened when it did–I needed something to distract me from the fact that I would attend two funerals in under five days.

The wedding was a great time and I managed to lose the groom’s (and now bride’s) house key just before the wedding. I had crashed at his house the previous night (my flight got in about 1:00 AM), and I was the last one to leave the house before the wedding. It turns out I had just left the key in the front door (which is probably worse than losing it), and all was well. Still, I felt ridiculous distracting the groom from his wedding reception so I could tell him I lost his house key.

That was Saturday. On Sunday morning, I had breakfast with some friends and then headed back to Gainesville to unpack and repack. On Monday morning (the 20th), I went to Jacksonville for my maternal uncle’s funeral. This was rough because he passed away very suddenly. I didn’t get to see him before he died, so the funeral was particularly difficult. I’m not writing more about losing my grandmother and uncle because I don’t really know how to write about those things. I’m not sure what else to say.

I spent the day in Jacksonville with my family, then headed back to Gainesville. I had to pack because I was leaving for Vegas (and the 2011 WSOP) on Wednesday (the 22nd) at about 5:00 AM.

The 2011 World Series of Poker

I’ve already written a lot about my time in Vegas, so I won’t rehash that here. Here is the recap I wrote after I got back.

I was in Vegas until July 19 (almost a month total) playing poker, eating great food, writing and hanging out with my poker-playing friends. I had a good time, but I was ready to head home (especially after I busted from the Main Event with Aces – see Day 23 here). I ended up writing over 15,000 words about my time in Vegas, and it was really great to have so many friends and family following along with my Main Event run. 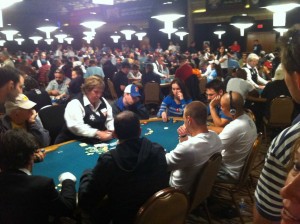