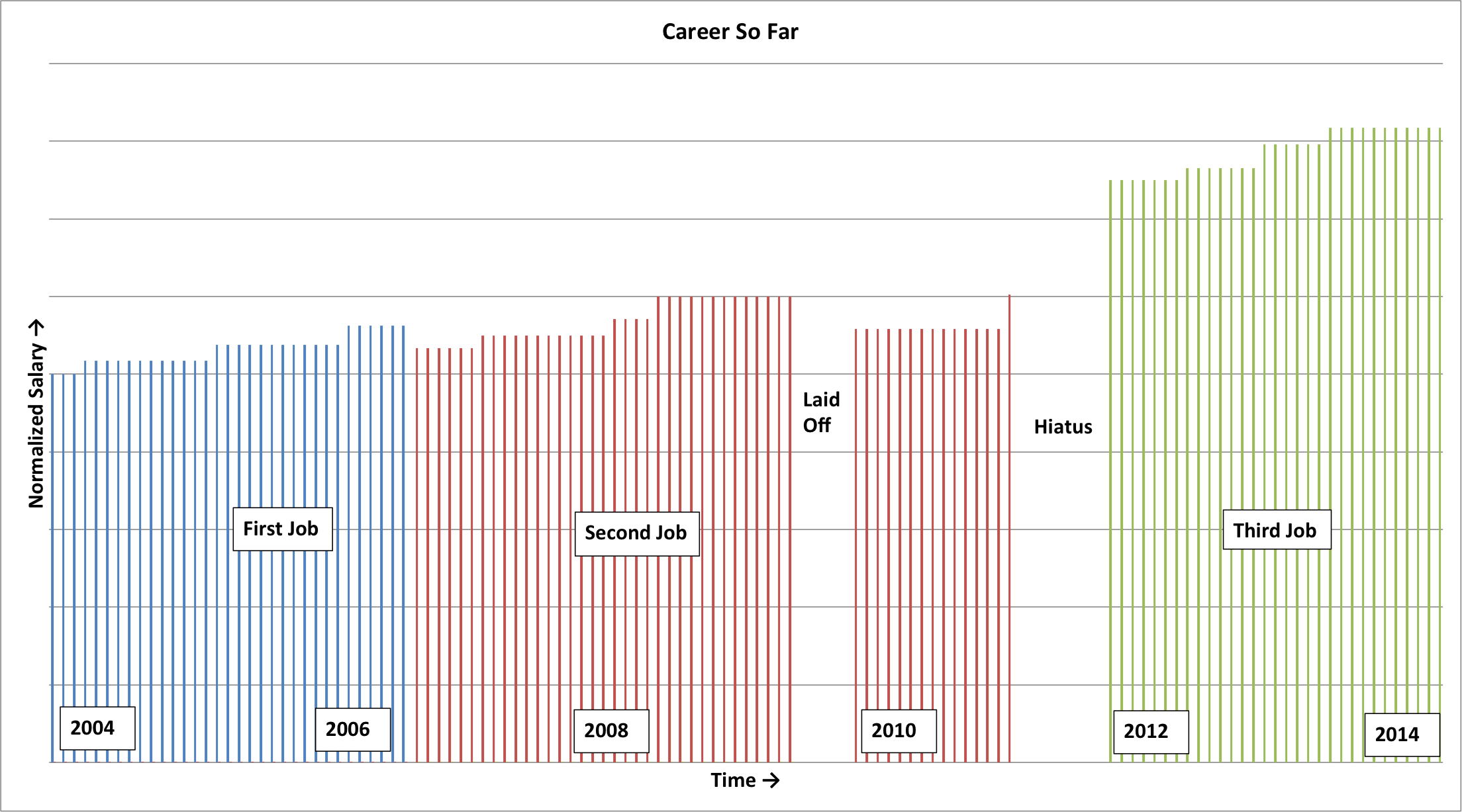 I was 25, and I wanted to move my career along as quickly as possible. I had my first real job, and had gotten three raises and a promotion in only two and a half years, nudging my salary up 12% from when I started. I was feeling pretty good.

Then two things happened that changed my career’s trajectory. First, my boss told me that striving for big raises and promotions would get me nowhere. “The way things work around here,” he said, “is you might get a big raise one year, or even two raises, but they’ll eventually work out so that you’re right back at the average. It’s hard to get ahead or fall behind.” He meant that I might be on top now, but eventually I’d regress to the mean. My boss had been working at the company for 30 years, so he knew what he was talking about. Ouch.

Second, I had been begging for a new challenge and just hadn’t gotten one. I had been looking for ways to stay interested, but got more and more bored, so I asked my boss for a new challenge. He eventually offered me a new opportunity: the same work I had been doing, but in a crummier location. I asked if we could keep looking.

A couple of months later, my boss came to me with yet another opportunity: I would move to a different building and redraw schematics for a 20-year-old piece of test equipment. I could hardly believe it, but he’d actually found a worse position than the one I’d already turned down.

But he made it clear that I couldn’t keep saying no to these opportunities?—?I was being too picky, and it was making both him and me look bad?—?so I reluctantly accepted the position.

Looking for something new

I started looking for a new job for two reasons: first, I needed to get out of there; but second, I wanted to know if I was over-valuing my abilities. I was young but self-aware enough to realize that one very plausible explanation for my frustration was that I just wasn’t very good at what I was doing. Maybe my boss was in the uncomfortable position of having a really ambitious, but really ineffective employee on his hands. Maybe he had done everything he could to pacify me without putting me on an important project that I would just screw up.

Around this time, a friend reached out asking if I knew any web developers looking for work. I told him that I did know someone…me! I had a little bit of web development experience and after we talked, he suggested I might be a good fit for his start-up’s client services team. I interviewed with the company’s CCO and he offered me a job as a Project Manager. I had also been interviewing for a managerial position in a different city and, although I didn’t get that job, those two opportunities reassured me that I was a valuable enough employee to take seriously. I happily took the Project Manager job at the start-up.

Before I could start my new job, I had to wrap things up at my old job. Ironically, my manager on my temporary project (redrawing old schematics) had been the best boss I’d worked for my whole time there. On one of my last days, as we were looking over some schematics, he gave me the best career advice I’d ever gotten:

My second job meant a career change from electrical engineering to project management. I took a small pay cut, but that was completely reasonable considering I had no client-facing experience. I went on to work there for five years, scratching and clawing my way to a slightly higher salary than I’d been making as an engineer.

Of course, the money wasn’t what I was after?—?I wanted experience, and I found it by pursuing unusual opportunities, including a “special project” that ended up being crushed after nine months and getting me laid off. But they soon hired me back to work in a different capacity, which again provided great experience for slightly less pay. This position marked my second pay cut since starting my career, and I was making exactly the same salary I’d made as a test engineer, five years earlier. But by then, I had amazing experience and was in a position to move nowhere but up.

After five years in my second job, I finished up my MBA, which I’d been pursuing on the weekends. I decided to quit and take some time off to travel, relax and recharge.

After my hiatus, an old colleague from the start-up reached out from a different company: “You looking for work?” I was, and my experience landed me my third job, where I would make almost 30% more money than I had been making when I quit the start-up eight months earlier. Just like my sage manager said, my third job was where I got paid.

I’m glad I heard that advice during my first job, because it allowed me keep putting in time when things got tough. I knew that getting paid was inevitable if I continued to do good work and gain experience. That advice allowed me to stop obsessing over raises and promotions and start focusing on trying new things and building my resume so that when I did encounter a lucrative opportunity, I would be ready.