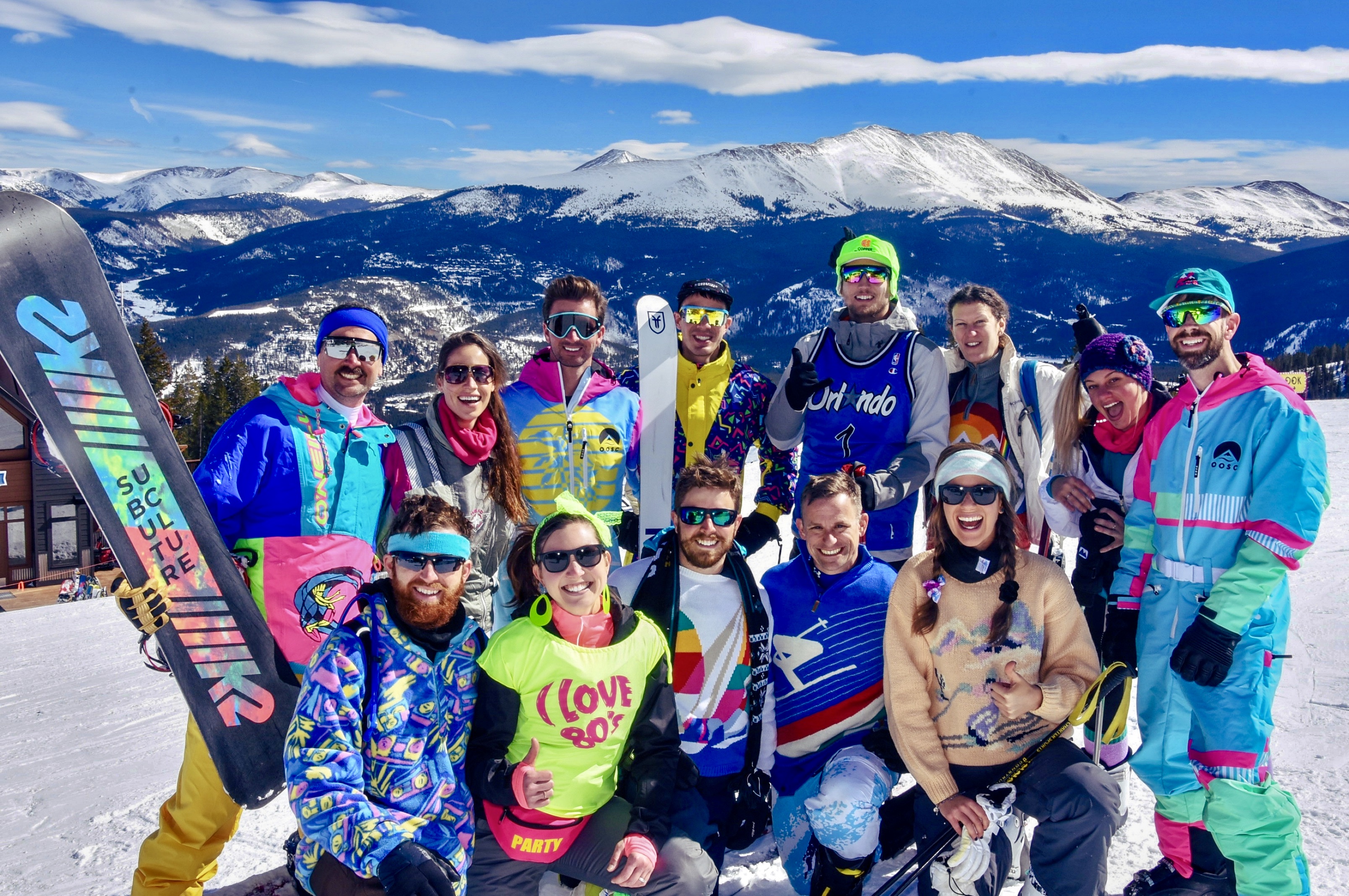 I’m back from our annual ski trip and I had a blast. This year was an interesting mix of firsts and caution, and I made a ton of progress. (Last year was great too, read about it here.)

This year, we added an 80s day, which got us a ton of attention and made our first day on the slopes a lot of fun. There were two types of outfits: 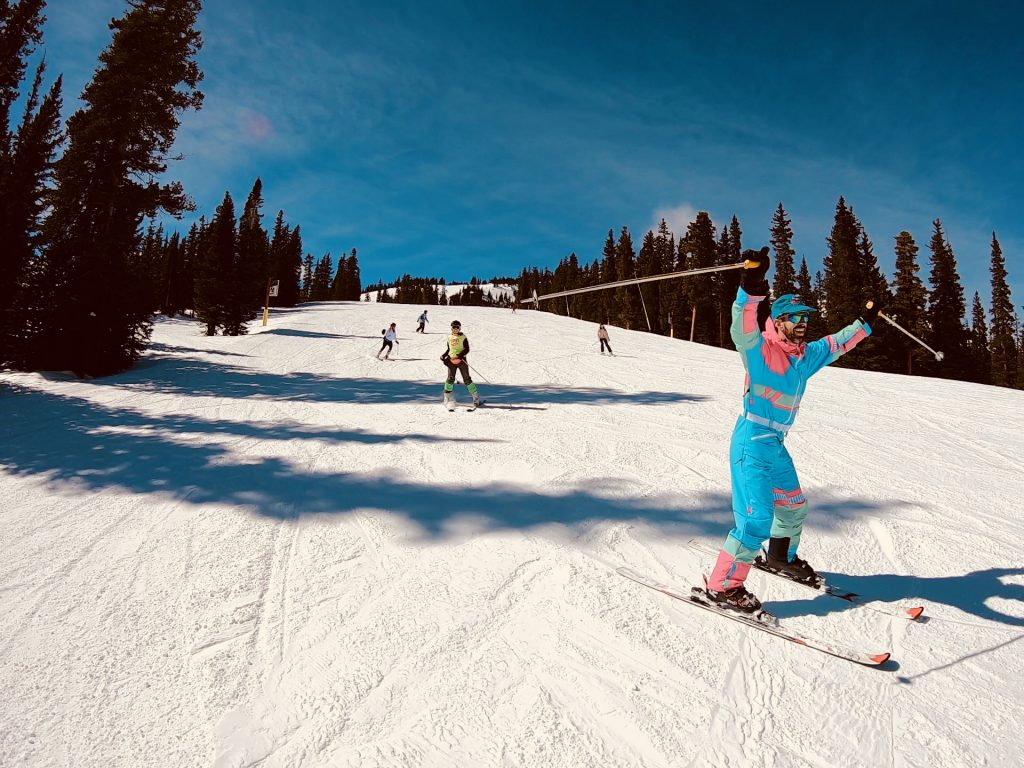 We picked the perfect day to do this since it was relatively warm, the sun was out, and the sky was blue all day. The groups pics we got at the top of Peak 8 made the whole thing worthwhile (the rest of the day was gravy). 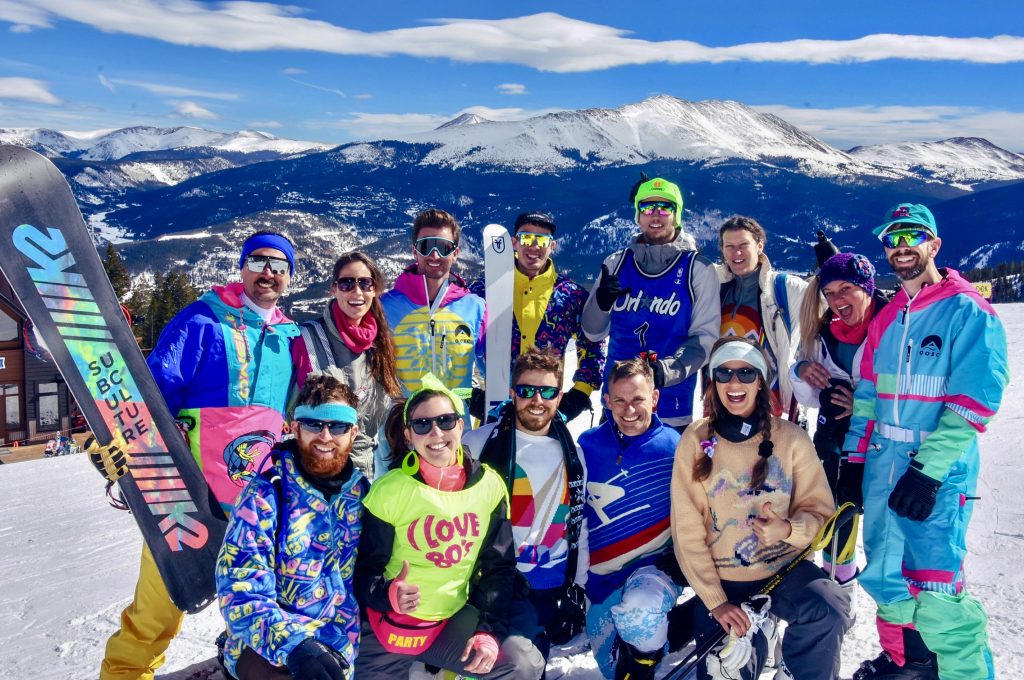 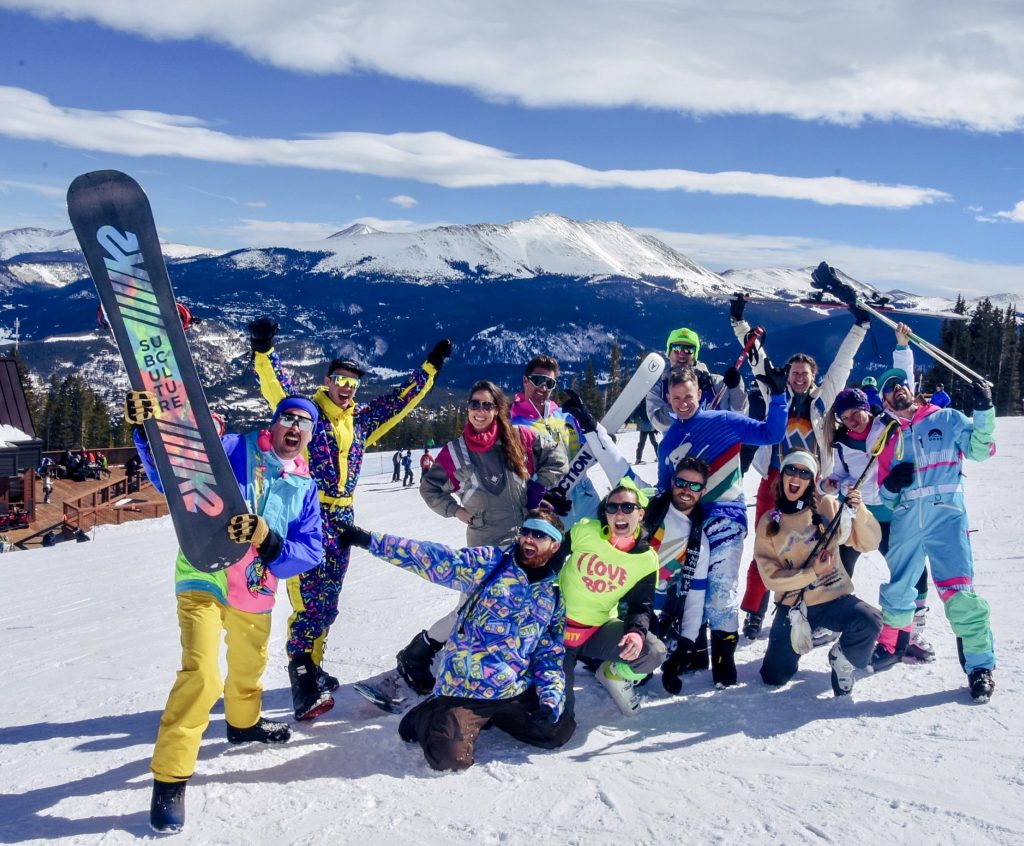 Slow and steady progress as a skier

This was basically my second time skiing. Technically, I skied a few times in high school, but I don’t count those because we were on east coast ice, and no one ever actually showed me how to ski. So I was terrible and I hated it.

Last year was the first time I skied on anything resembling powder and I also took lessons, so I immediately felt better about it and made progress quickly.

This year was interesting because I was the worst skier in our group, so I was the one holding things up most of the week. But I wanted to take my time and work on some things to make sure I was actually improving as a skier and not just ramping up the difficulty.

First day on the slopes

Our first day on the slopes, I felt pretty uncomfortable on my skis. Skiing is not like riding a bike—and I felt like it was my first time out. But after a few runs, things started coming back and I felt a bit better.

By the end of our first day, I felt like I was pretty much back to where I left off last year. I could comfortably cruise down most of the blues, occasionally feeling like I wasn’t quite in control. This was a super long day because we went out early-ish and came home late-ish. We did a bunch of runs and those runs were challenging for me since my form was so rusty. I was totally spent at the end of the day.

Second day on the slopes

I decided to take our second day and just focus on technique—specifically turning and maintaining my speed while staying in control. My friends would frequently say, “Wow, you really flew down that one! You’re getting a lot better!” And I would say, “Well, that’s because I only have two speeds—Stop and Go. Once I’m in Go-mode, I’m just trying to stay upright until I can slow down.”

I wanted to feel in control most of the time instead of feeling like I was just trying to stay upright and avoid wipeouts. So I stuck to blues and slowly improved.

Although I didn’t move up to more difficult runs as quickly as I did last year, I made a lot more progress in my first couple of days on this trip. By the end of the second day, I actually felt more like I had control, I could slow down when I wanted to, and I was able to choose my lines rather than just taking wide S turns and hoping for the best.

My turns got much tighter and I was intentionally hitting spots that seemed easier to navigate. I actually went in about an hour ahead of most of my peers because I was still beat from the first day, and I felt I had accomplished what I wanted for the second day.

Third day on the slopes

I asked a couple of friends where I could find the easiest black run at Breck. The answer came back: “Dukes.” It was a relatively short run that used to be a blue, but they turned it black so intermediate skiers wouldn’t get spooked. So it was technically a black, but only just.

My goal for the entire day was to get more comfortable and eventually do at least one black run, so I pretty much mapped out the day to slowly move toward that goal.

Even before I started going on this trip last year, there was much lamenting that fresh snow never arrived. It was almost like this specific trip had some sort of jinx on it so that it was always warm and sunny with no new snow during the trip.

That all changed this year, and we made up for lost time. In our last two days at Breck, I think there was over a foot of snow and it just kept coming.

So I swapped out my regular skis for “powder” skis to start the third day. At first, this was kind of frustrating because I had to re-learn a lot of what I had worked on the previous day. Turning was harder, stopping was harder, maintaining control was harder. Everything was harder.

But once I got used to the new skis, they were much better and easier to control.

A solo run for my first black

After several good blue runs, it was time to make my way to Dukes, the easy black my friends recommended. I actually scoped it out during my first run of the day since it starts from a common catwalk that we use to move between peaks.

I was going to run it with a friend, but he ended up stopping early, so I was on my own. But before we parted ways, I asked if he had any suggestions—he had three:

And off I went.

The lift dropped me about 100 yards from the top of Dukes, so there wasn’t too much time to think about it once I was off the lift. I initially planned to get to the top of the run and give myself a minute or two to gather my courage, but it turned out I didn’t need that kind of time.

I got to the top of Dukes, looked at it and thought, “Meh, that doesn’t seem so bad. Let’s go.” And I was off. Overall, it was a pretty good run and I used all three of my friend’s tips.

I actually made it down the steepest part without any issues, but I relaxed too early because I didn’t realize there was a second steep part that was also icy and bumpy. All of a sudden, I realized, “Uh oh, I’m going too fast and this is all bumpy ice. Need to slow down… or need to at least try to maintain control until I can slow down.”

I didn’t quite succeed, but I didn’t quite fail either. I basically ended up spinning out so that I didn’t technically “fall”, but came as close as I could’ve. After a few very ungraceful flailing spins, I found myself stopped, skis splayed, hands on the ground in front of me, holding me up. I regained my composure and it was easy from there on out.

I remember getting to the bottom and thinking, “Huh. That wasn’t so bad.” I almost talked myself into doing it one more time, but I thought better of it and made my way back to our house. 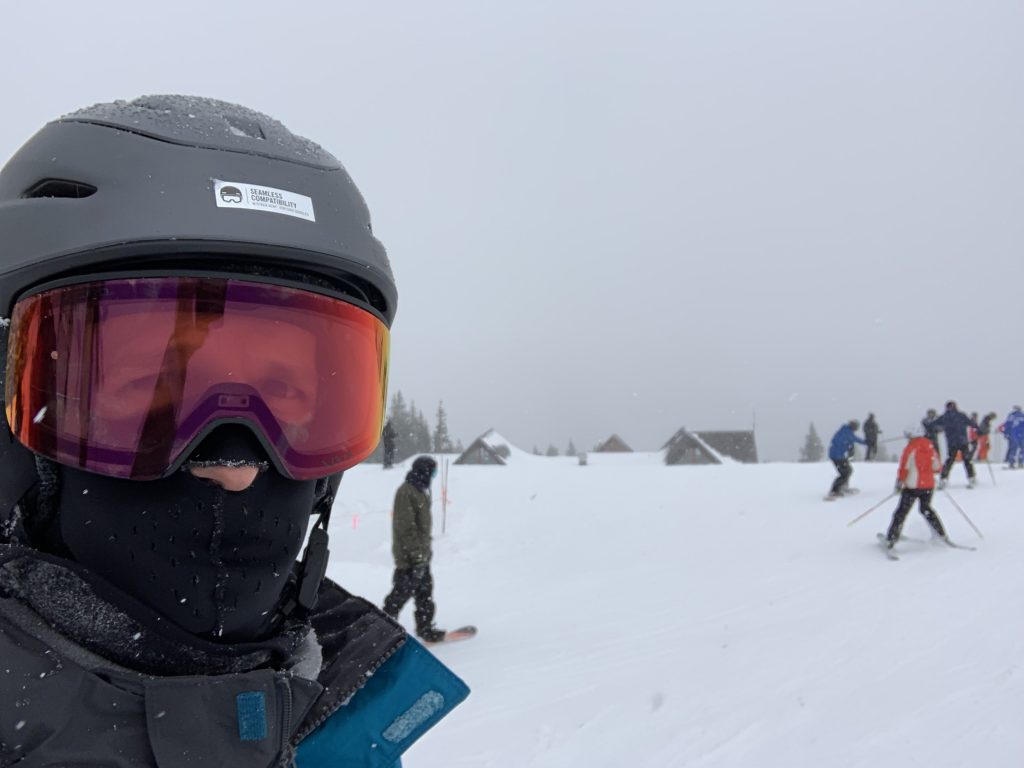 Fourth day on the slopes – or not

I finished my third day on a real high. I finally felt comfortable on my skis, I felt more in control than I had at any other time this year or last, and I did my first black.

But I also felt like I had been pretty lucky so far. I had been really tired a few times during the week, but had managed to get good runs in despite the fatigue. I also had a strained right adductor to watch out for.

Before I went skiing, my doctor said, “Sure, you can ski. But don’t do anything crazy and stay off the tougher blacks.” Remember the spinout I mentioned on Dukes? It was exactly the kind of awkward motion that could’ve reinsured the adductor. I’d been rehabbing that stupid thing for 5 weeks, and hadn’t run in almost 10 weeks because of it, and I wasn’t looking to re-injure it if I didn’t have to.

So I had a really tough time deciding whether to go back out for our fourth ski day, or if I should just take it easy.

I ultimately decided to take an actual vacation day and just hang around the house, and there were a few factors at play there:

It was basically a coin flip that came down to, “I’ve checked all the boxes for this trip and I didn’t re-injure my adductor. I finished on a high and I am anxious to get better and ski more when I’m healthy. Maybe I should just quit while I’m ahead.”

I decided to just take the day off. If my adductor had been healthy, I would’ve gone out. But I knew that if I went out, I would want to try tougher blacks, and that would make re-injury more likely.

Even in hindsight, I’m not quite sure if this was the right thing to do.

A great trip with friends

The coolest part of the ski trip is that each day essentially has two major events: Skiing and hanging out.

Skiing is typically over around 4:00 at the latest, and that means we have another eight hours before we go to sleep. We typically try to squeeze in all four of these things after skiing:

We checked all those boxes a couple times and hit three of four every night (I think).

We had some amazing food—The Canteen, Michael’s, Giampietro, Empire Burger (the sides and sauces are amazing)—but I didn’t document any of it because I was too busy eating it.

And I was finally mafia in Body, Body, Body and got the win. So now I’m one-for-one as mafia, but still only like one-for-fifteen being mafia. The law of averages will eventually catch up and I’ll go on a mafia spree (or maybe I’ll just cheat—ahem, GP—and make it happen on my own)

This made my final ski day a lot of fun, and I’m sure it made Dukes (at least the top part) much easier. My friends said it was the best snow day they had ever seen, and some of them even extended their trip to get more time in the powder. 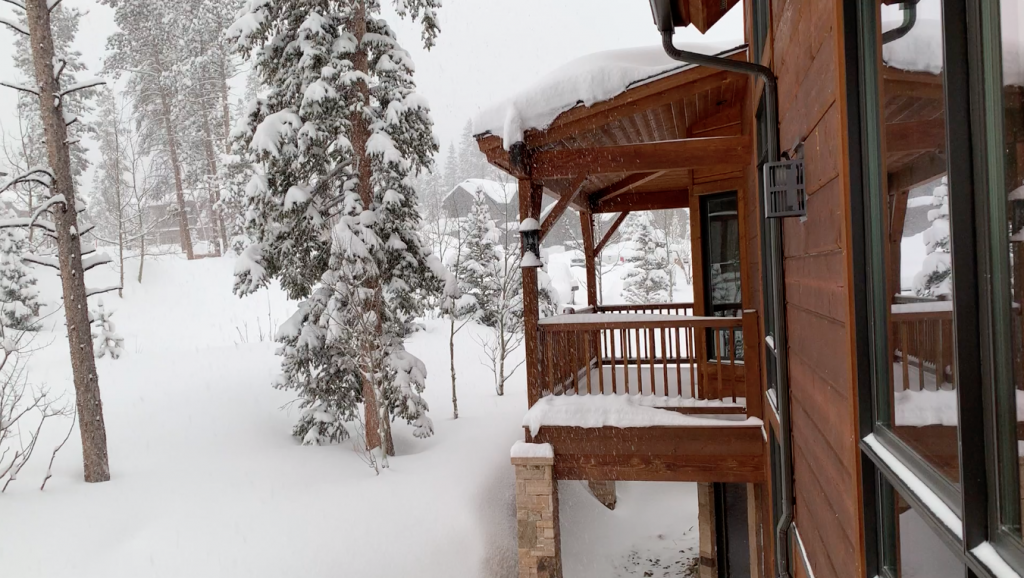 Of course, the snow giveth and the snow taketh away… the ability to travel. We had a few rental cars with varying numbers of passengers, and some of the cars had trouble either explicitly getting through the snow, or in driving from Breck back to Denver. My car was pretty lucky because we left early. It took us almost three hours to get to Denver (normally two hours), and we had to stop to manually de-gunk the windshield a couple times, but we made it. There was also an avalanche about 20 miles west of us on I-70, so I’m obviously glad we missed that.

Some other folks either missed their flights after a long (five hours!) drive to Denver, or simply got stuck in the snow in Breck and had to wait it out (this may or may not have been related to an ill-advised decision to rent a 2WD truck despite a steep driveway and a snow-heavy forecast).

When we finally go to Denver, it was 3 degrees outside—the lowest March temperature in like 140 years. Apparently it got as low as -6, so we got there when it was nice and toasty outside.

All in all, this was another amazing ski trip and I can’t wait to get back out there and hit some real blacks next year.