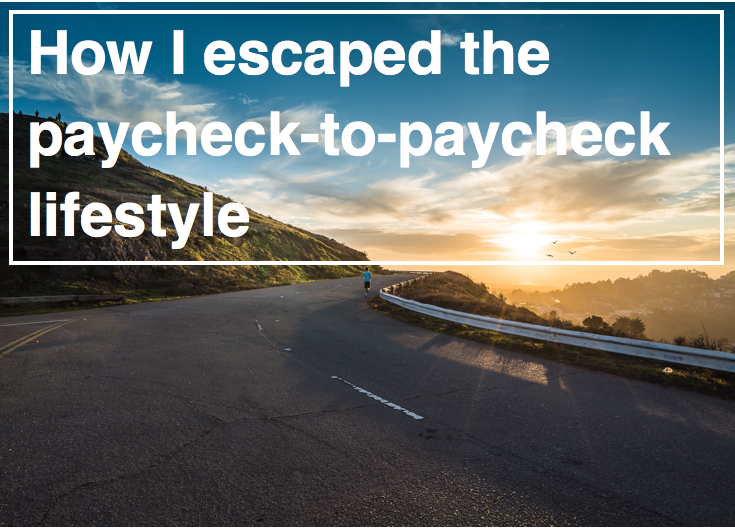 This question on Quora and gave me a great opportunity to finally write about how I went from someone who lived paycheck to paycheck to having options and freedom to choose how I spend my time.

I haven’t written too much about this, but it was key in my decision to leave my day job and focus on writing books and software full time.

What is it like to be saving 70% of your salary?

In 2008, when the US economy was in trouble, the company I worked for began laying people off once a quarter. I realized that if I was let go from my job, I would be in very big financial trouble. I had credit card debt of the “0% APR variety”, but that was only “free money” if I made the minimum monthly payments. I had a new mortgage that was quickly losing paper value thanks to the housing bubble, and I spent quit a bit of money improving my house the first year I owned it. I had a lot of student loan debt.

I could “afford” all those things, but only if I continued getting my paycheck every two weeks. I realized something had to change, so I started paying down debt and saving my income.

First, I paid off all that 0% credit card debt as quickly as possible. Then I started saving for an emergency fund. Near the end of 2009, I was let go from my company. It was terrible timing because I had very little money saved up, but at least I didn’t have that credit card debt and I had a little bit of money on the bank. I wrote about the experience of getting laid off here: Out of Work and Loving It: How I handled my four-month jobless stint (Part 1 of 3).

When I started saving

In early 2010, I got a call from the same company that had let me go, and they offered me a different job. I realized that the only way I would get to do what I wanted to do when I wanted to do it was to reduce my debt and save up cash. So I took the job and started saving money as aggressively as possible. I saved about 50% of my take-home pay while I had that job. After about 15 months, I had enough money saved up that I voluntarily left the job and took an eight-month sabbatical. This was only possible because of the epiphany I had in 2008—if I wanted to have options, I had to reduce debt and save money. I wrote about quitting my job here: Why I just quit my job (Part 1 of 2). And I wrote about what I did during that sabbatical here: What I did during my hiatus from the working world (Part 1 of 3).

The catch was that I had saved up money, but still had quite a bit of debt—a secondary mortgage, undergrad student loans, and grad school loans (I finished up my MBA right before I started my sabbatical). After about eight months, I found another job making more money. I started that job in January 2012.

When I started paying down debt

I really enjoyed my sabbatical and the freedom it offered me. Not only had I done whatever I wanted for eight months, but I had been extremely productive. I wrote my first book, did some traveling, and learned how to build web applications using Ruby on Rails. I wanted to try it again, but I needed two things to take another sabbatical of the more-permanent variety: 1. Pay down debt; 2. Find other ways to generate income outside of a day job.

So once I started my new job in 2012, I saved about half of my take-home pay until I had a six month cushion in the bank. Then I began paying down debt as aggressively as possible. Following the advice of a Kiva loans review I read, first I got rid of my graduate student loans (they had the highest interest rate), then my undergrad loans, and finally my secondary mortgage. I also refinanced my primary mortgage to a lower interest rate so my monthly payment was the same but my repayment period was 10 years shorter.

It took 2.5 years, but I was debt free in July 2014. (Proviso: I still have my primary mortgage, but I’ve decided not to pay that off for liquidity reasons.) At that same time, I got a great job offer that I couldn’t refuse—better work, better pay.

Back to saving and making new things

With a higher income and no more debt, I began saving as aggressively as possible. I saved about 70% of my take-home pay, and that savings added up quickly. I enjoyed my job, so I wasn’t in a hurry to leave, but I could leave whenever I wanted to. This brought me full circle to the resolution to my epiphany from 2008: I no longer needed a steady paycheck to live.

Saving and earning—two sides of the same coin

I realized that saving more—cutting expenses, paying down debt—was only one side of the “do what you want” coin. The other side of the coin was making more money. Each time I changed jobs, I negotiated a higher salary while keeping my cost of living the same. Earlier—see “When I started saving”—I saved 50% of my take-home pay. But now I’m up to 70%. What changed? My salary—my expenses were almost exactly the same.

If my plan was to get rid of debt and accumulate savings as quickly as possible, then I should not only reduce expenses, but try to increase my income. So I started thinking a lot about how I had negotiated higher salaries. My day job for the past several years was in the Talent Development industry, which includes “Compensation Management”—how companies structure their salaries, pay structures and career paths.

Finding other ways to generate income

Using my knowledge of how companies manage their pay structures along with my own experience negotiating higher salaries and helping friends do the same, I began writing a book, Fearless Salary Negotiation. My goal with the book is to extend my own independence from a day job while helping others maximize their own incomes at their day jobs so they can save more of their incomes, too.

Once I had money saved and projects that could generate income, I decided to leave my day job again so I could focus full-time on finishing those projects and trying to make my independence from a steady paycheck more permanent. I wrote about that decision here: Flying Solo: Leaving a day job to build my own products. That brings us up to today.

Back to my answer: “It is liberating.”

My answer to your question is either really short or really long. You could just stop at “It is liberating.” and you would have the whole answer. But you can see that my story shows that “liberating” is really a process that started with an epiphany that living paycheck to paycheck meant I was locked into my day job to survive. Once I realized that, I began paying down debt and saving money so that I wasn’t beholden to that regular paycheck.

Once I realized that I could reduce expenses and debt, and I could increase my income by negotiating at the right times, I was able to save 70% of my take-home pay. Saving 70% of my income gave me options. I could keep working and making a good living, or I could quit for an eight-month sabbatical, or I could eventually quit to work on my own products.

It’s also liberating because if I return to the “day job” world, it will be because I want to return and because the opportunity is really exciting to me. It won’t be because I have to have a paycheck to survive. A big part of this is that I live a relatively frugal lifestyle. I have a small house. My car is 10 years old. I wear $40 tennis shoes. And a big part is that I made the most of my day jobs by negotiating a higher salary. That combination—living frugally and earning more—set me up with options.

That’s what I mean by “It is liberating.”?