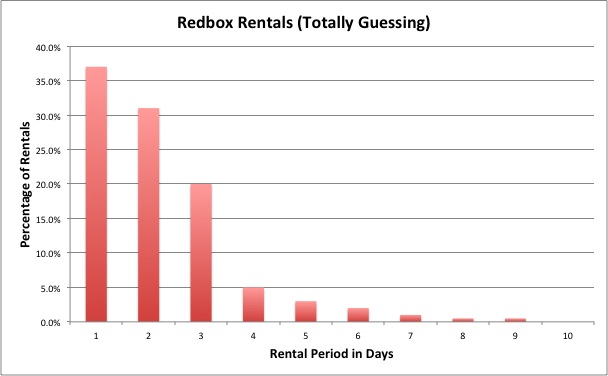 A while back, I wrote about the price differences between Redbox, Amazon and iTunes for renting movies. My friend Andy emailed me to point out that I had missed a pretty big component of Redbox’s pricing scheme: Late fees. This was a pretty big oversight since it’s obvious that there will always be some people who keep a movie for multiple days. So I’m going to revisit this to make a better comparison.

Amazon and iTunes both rent for a fixed price, and then the movie simply becomes unviewable 24 hours after the movie has been started. Redbox charges $1 for a DVD for the first day, but they also charge an additional dollar for each day after that. If you keep the DVD for 25 days or more, then you own it for $25.

The time that people keep a Redbox DVD is probably distributed something like this*: 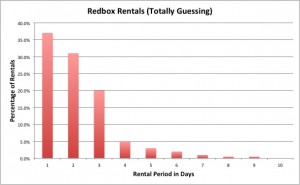 Redbox’s 10-Q for Q1 2011 says the Net revenue per rental was $2.20**. So the average renter keeps the DVD for 2.2 days and pays $2.34 (which is $2.20 plus tax in Gainesville).This is for all kiosk rentals, so it’s not just DVDs. But the point is that I’m guessing almost everyone will return the DVD in the first three days, but a few will hold onto it for several days.

So here are the price comparisons (from the average renter’s perspective) updated to account for typical rental times at Redbox kiosks:

These numbers make it more plausible that the difference in prices is mostly due to a “convenience premium”. Is it worth $1.65 to go to a Redbox kiosk instead of just streaming the movie to a TiVo or PC? For me it was, but for many it won’t be. Also, when I went to return “Waiting for Superman”, the kiosk was broken, which meant I had to go find another one. If I had known I’d have to make three trips to Redbox kiosks to save a couple bucks, I probably would’ve just rented the movie from Amazon.

iTunes is probably more expensive still because of the Apple brand and the additional convenience that an iTunes movie can be watched on Apple TV, a computer or synced to an iOS device (iPad, iPhone, iPod) and taken mobile.

* In case it’s not clear: I totally made this up based on the reported $2.20 “Net revenue per rental”. I’m assuming that people will either return the DVD in the first nine days, or they’ll keep it the full 25 days and end up buying it. I stopped the graph at 10 days to make it easy to read, and I assumed that one in 1,000 rentals would end up being bought after 25 days. Also, I’m being lazy here and not trying to tease out the actual DVD numbers since I’m using the $2.20 they reported, which includes Blu-ray and stuff.

** I’m a little confused by their terminology here. What I really want is the gross revenue per rental, but I can’t figure out what that is. I looked at the Notes to Consolidated Financial Statements, but I still can’t tell exactly what the “Net revenue per rental” number is. For Q1 2011, if I just take “Revenue” for the Redbox segment and divide by the “Total rentals”, I get $2.20. But this doesn’t work for Q1 2010 (I get $2.19, but they reported $2.16), so I don’t know exactly where that “Net revenue” number comes from. It seems like the gross number just isn’t being reported. The Redbox Wikipedia page claims (via the New York Times) $2 per transaction as of September 2009, so that makes me think the gross number is $2.20 and also makes me wonder why Coinstar is reporting it as a “Net” number. It’s also possible everyone else is misinterpretting the “Net” number as the gross per-rental number, so the gross per-rental number might be higher.