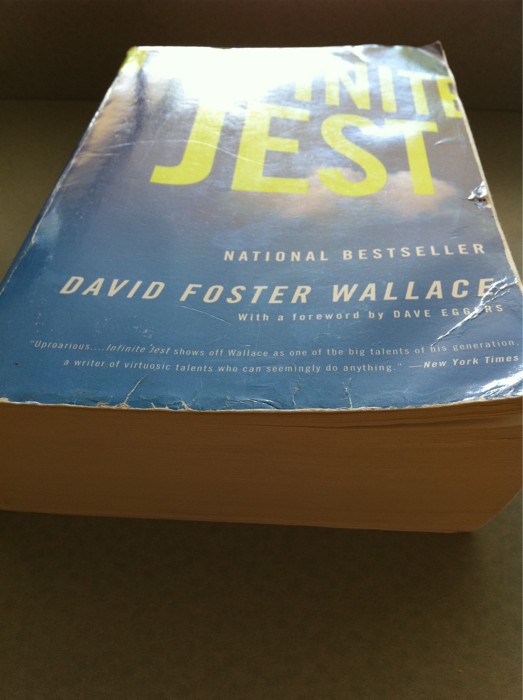 Infinite Jest is David Foster Wallace‘s best-known novel. It’s not so much something you read as a project you do, so deciding to read it is a pretty serious commitment. Not only is it just long and dense, but DFW uses footnotes as a major part of his story-telling process, so the reader spends a lot of time bouncing back and forth between the main text and the footnotes at the back of the book. I eventually began using two bookmarks – one for the main text and one for the footnotes. There are like 80 pages of footnotes, all of them in tiny font, some of them in really tiny font. Many of the footnotes have footnotes.

A few of my friends have asked if they should read it too. Normally, I would have an answer ready to go. I’m not shy about making recommendations or saying that something stinks. But with Infinite Jest, it’s just not that simple. So instead of saying yes or no, I’ll make a list of the cons and pros of reading it (this is spoiler-free) so each potential reader can make his own decision. Note that these are sort of dependent on one’s perspective and book preferences – some of the pros could be cons and and vice versa.

Some critics have said that Infinite Jest could’ve used more editing, but I’m not so sure. In a way, it’s sort of like DFW gave us as much as he could give. And given that he’s not around to write anymore, I think he left Infinite Jest as a pretty substantial gift to the literary world.

But yes, you should read it.

I’d love to hear what other Infinite Jest readers think – let me know in the comments!

PS If you decide to read it, and you buy it from Amazon, I make a buck or something if you use this link. And if you were thinking about reading it and then thought, “Well, if he’s just plugging this book so I’ll buy it and he’ll make a buck, I won’t read it!” then don’t click the link and go buy it somewhere else and read it anyway.