I got peer-pressured into running a Half Marathon a couple weeks ago.

Also I was promised free cupcakes at the end of the race and I have a very, very hard time saying no to cupcakes.

So I did some light training, re-aggravated some nagging injuries, and ran my first Half ever.

Overall, I’m pretty pleased with my performance. I ran an 8:24 mile pace and finished in a decent time and I finished 9th overall out of 99. 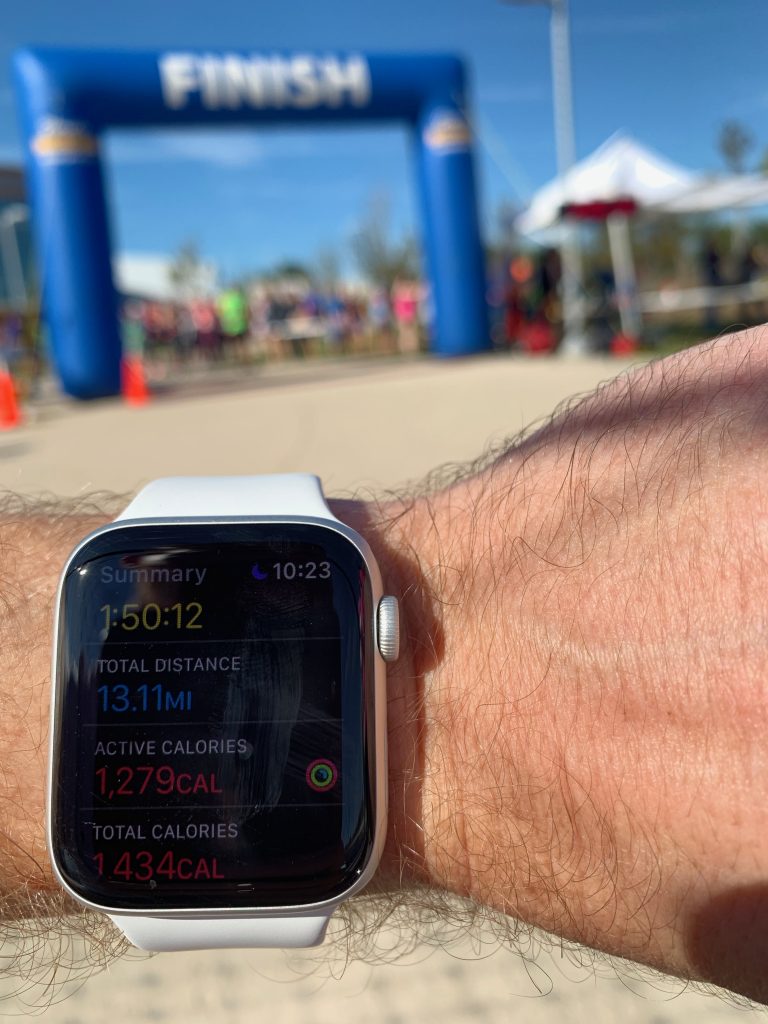 But I also ran out of gas on the back half and I couldn’t find enough energy to push for the end of the race. My mile splits just sort of kept slipping and slipping until I finally finished.

Part of this was my training—I didn’t run more than 9.3 miles before the Half—and part of it was probably nutritional (I should’ve had some gel packs or something).

Overall, it’s a good result and I’m happy I finished.

Unfortunately, I went a little too hard in my training two weeks out from the race. I didn’t mean to, but I felt so good on my longer training runs that I just sort of kept going.

I felt really good after all those runs.

Then on Saturday, eight days out from the race, I ran a medium-pace 10k (7:54) and that’s when things started hurting. I’ve had a nagging groin injury for a while, and it lit up during this run. Then my knee on that side also started hurting, probably because I was changing my gate to compensate for the other pain. My calf on the opposite started aching too—also probably compensatory.

So I went from feeling amazing to having a few dings that would still be sore on race day.

Fortunately, I was able to get in for a sports massage session, and that calmed things down enough to finish the race.

Still, it’s been 10 days since the race and my calf and groin still aren’t quite right. I just have to take it easy for a while so things will heal.

And this also confirms for me that I don’t think running a full marathon is even remotely a good idea for me.

Since I hadn’t run this far before, I started off by taking it easy. I held back on my first mile and it still only took 8:15. I was hoping to end up at 8:15 for the entire race, and I felt great at this pace—I thought I might actually hit it!

Once we settled in, I was able to start keying off my cadence and how I felt in general. I felt great for the first several miles, but I also knew I wouldn’t feel too great for the last few miles. So I picked it up a little bit and passed a few people, but still held back.

The middle of the race was pretty hilly and painful, and I was happy I hadn’t pushed too hard earlier.

Once I got near Mile 10, I thought I might try to push and pick up the pace. I did push, but my pace started slowing as I just ran out of gas. I’m fine with that—I expected to get tired on those final four miles since I’d never run that far before.

My biggest problem was muscle fatigue—my muscles (especially my calves) just were not used to running that far. My cardio felt really good the whole time—I was never even remotely out of breath, had no side stitches, nothing that indicated I need better cardio.

But to go faster, I’ll need to increase my cadence from an average of 171 SPM to at least 175 SPM. To do that, I need better muscle endurance and more late-race energy.

I feel like my plan and strategy were very good. I’m not sure I would do anything differently if I could run this race again.

How I’ll improve for next time

This is actually pretty simple:

I’m very happy that my cardio was strong for the race, and not surprised that my calves got tired. I can fix that.

But the most interesting thing is that I got a rare chance to literally experience a figure of speech: I went the extra mile.

It’s not quite as crazy as it sounds, but it still felt pretty crazy at the time.

This particular race was totally disorganized. It was so disorganized that the actual race distances weren’t right. Not even close, actually.

About 10 minutes in, I realized the course couldn’t possibly be 13.11 miles. It was an out-and-back race, and I could see that the shorter distances (5k and 10k) weren’t right because I got to their turnaround points before I should have.

So I started prepping myself: “Josh, you’re going to be tired when this is over. But you’re also going to need to keep going past the finish to get the full distance. That’s not gonna be fun, but you didn’t come out here to run ALMOST a Half Marathon, so you’re gonna keep going until you hit 13.11 miles.”

Sure enough, I crossed the finish and my Watch said I had only run 12.1 miles. So I ran past the guy handing out finisher medals, grabbed my medal, and just kept going for one more slow, painful mile.

But when I finally stopped, I had completed an actual Half Marathon and I’m glad I did that even if it probably looked a little strange to everyone else at the finish line.

Of course, I’m still a little dinged up—my calf and hamstring are both strained—but I finished a Half Marathon and I got to experience a real-life figure of speech to boot.

Next time I hear someone say something like, “We need to go the extra mile here.”, I’ll know what that’s actually like.