Earlier this week, I ran a mile in under six minutes for the first time. It felt really good for a couple of reasons.

First, it’s nice to achieve a challenging goal and it felt good to cross it off my list and see some results from all the hard work I’ve been putting in.

Second, I had already tried and failed to run a six-minute mile twice—both of my previous attempts were about 6:11—and that was really frustrating. I had been so close yet I felt so far away and it really stings to be totally exhausted without much to show for it. But not this time! This time I got it done.

What’s even better is that I had a significant breakthrough with this particular goal, but it’s difficult to describe without some context.

My one-mile run in almost-real-time

Here’s a summary of how I felt throughout the run—I took this down as a note on my iPhone once I managed to catch my breath and stave off some leg cramps:

First lap—1:27 I wanted to start fast because I knew that I could go much faster than the 90-second pace that I required. I added about 10m to that first lap to make sure I ran a full mile, so I wanted to be sure that I got around with time to spare on my 90-second-per-lap limit. That would give me some cushion if I slowed down later.

Second lap—1:28 I already felt tired, but I knew that would happen and had already prepared myself to just keep pushing and try and maintain the same pace through the second lap.

Third lap—1:32 This is when the mental fatigue really hit me. By this point in my run, my brain was repeatedly shouting STOP THIS RIGHT NOW!

I told myself that I was going to finish running a mile either way and if I just kept going at this pace it would be over quicker.

For the final 100 meters of the third lap, I basically had to get myself to focus on a six-minute pace again knowing I had been gradually slowing down and that I had probably used up most of the cushion from the first lap.

Fourth lap—1:26 I actually felt pretty good going in because I knew it was almost over. I’d also kept some energy in reserve, which I think was a result of my recent training to keep my legs working when I’m tired.

I started picking it up with about 300m left and began kicking with about 200m left. I went pretty much all-out for the final 100 meters although I never got into a full-on sprint. 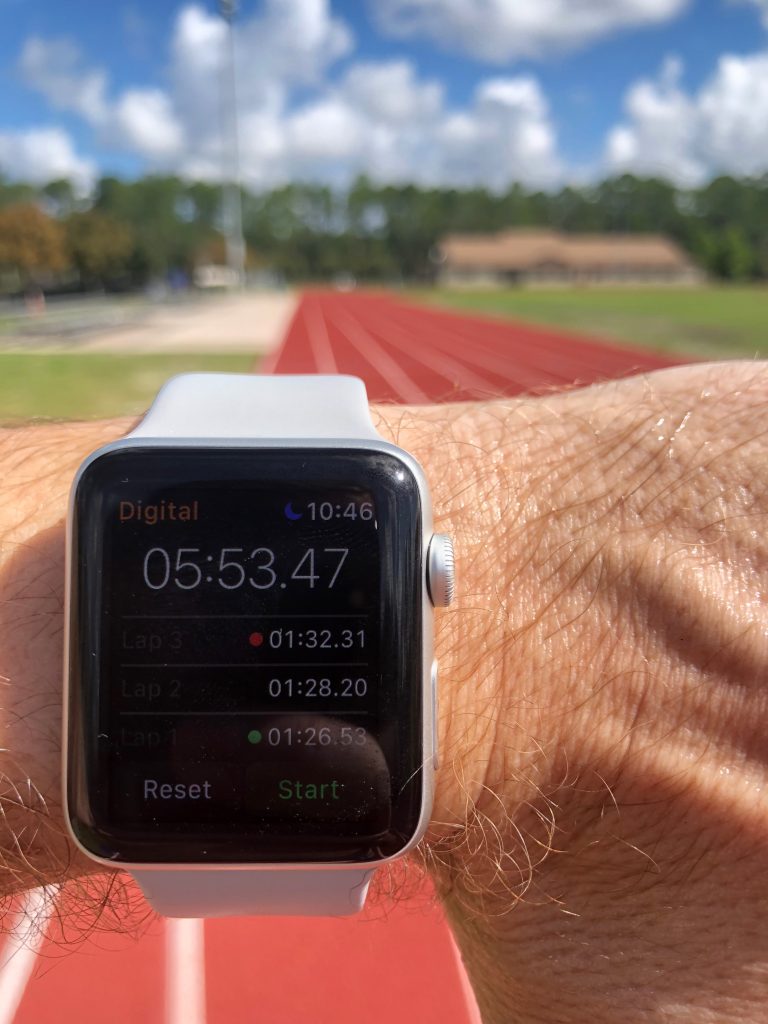 Even though I had been monitoring my time after each lap, I was really surprised to see a final time of about 5:54. That’s a significant improvement over my previous times. I actually had a little left to give at the end and the overall run went about as well as I could’ve hoped.

Before I say any more, take a minute to look back at that recap and see if you notice a theme.

Do you see it? There’s almost nothing about the physical difficulty of running a mile. The entire recap was almost entirely about my mental state throughout the run.

I started fast because I knew I had to. I got tired, but I knew that would happen so I just kept pushing. I told myself I would finish the mile regardless of how long it took, so I might as well just get it over with. I felt great and had some left in the tank, but I may have left some time on the table because I relaxed a little when I realized I had hit my goal.

It was all mental.

The last two times I tried to run a sub-six-minute mile, I lost too much time on the middle two laps. Those two laps are really tough because the initial adrenaline rush has worn off, yet there’s still a long way to go.

I expected to lose time in the middle due to physical fatigue, but I had also lost time due to mental fatigue because I wasn’t totally prepared.

I suspect I’ve been physically ready to hit this goal for over a year now. I just had to try it a couple times to see my own weaknesses and find a way to work around the mental fatigue that slowed me down.