…or at least that’s what we’re counting on.

Some friends and I are playing a game of Axis & Allies: WWI 1914. We started about 10 days ago and we’re probably half way through the game. 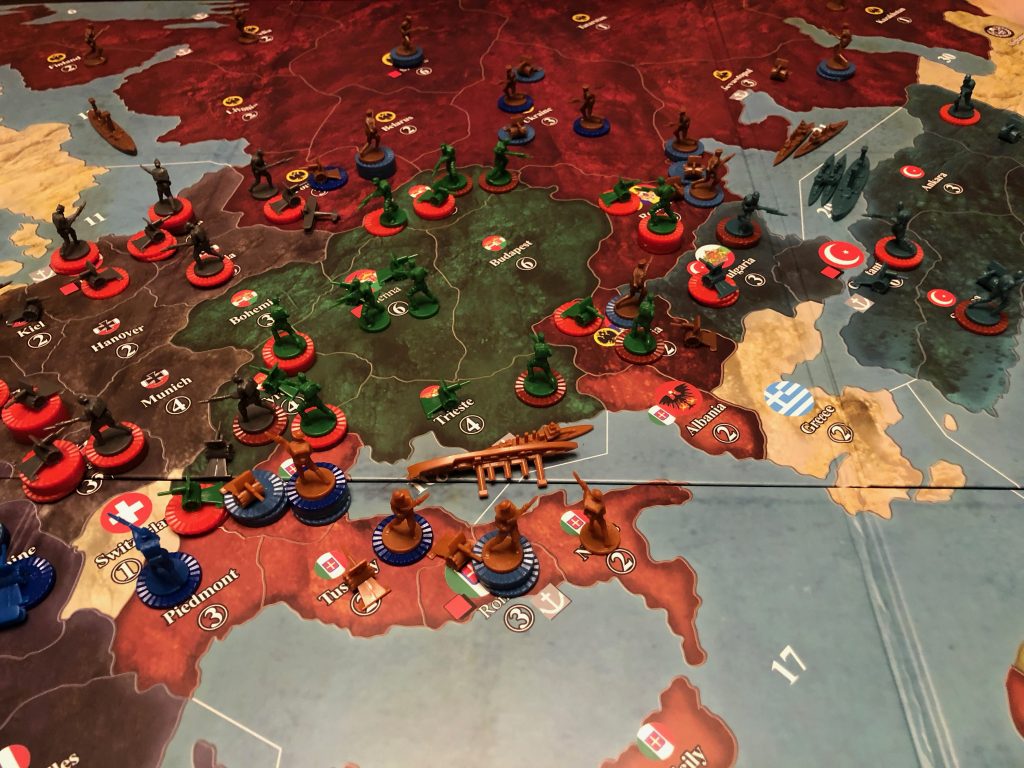 The early stages of the Eastern Front

I’m playing as Russia and the US along with my other Allies—France, the UK, and Italy. In the beginning of the game, the US sat out (just like in WWI), so I was only responsible for Russia and the Eastern Front.

It was immediately clear that the Eastern Front was a big challenge for Russia. My job was to hold the line as long as possible so the US could enter the war and swing things in our favor on the Western Front.

Fortunately, France and Italy have been playing well and getting lucky, so things are going well for us over there. I’m pretty sure the Allies will win the war on the Western Front.

This game is a lot of fun because it’s a good mix of strategy, tactics, and luck.

The luck component seems a little frustrating at first, but it’s a pretty true to how things actually happened in WWI.

A few countries would send a bunch of infantry to a battle front and although they might have some idea what would happen, the outcome would be uncertain until the battle actually finished. Maybe one side’s tactics were stronger, or maybe the weather thwarted one side’s game-plan.

In the real War, there were several battles where hundreds of thousands of soldiers were lost and nothing really changed.

It’s important to have a pretty good overall strategy, but the key to the game is to adjust our tactics any time we get new information. If there’s a big battle that goes our way, we may have more options available to us. If we lose a big battle, we may have fewer options and it might make sense to change course or ramp up our risk tolerance.

Lately I’ve noticed that this is true in my business as well: I make the most progress when continually update my current plan to match the information I have and to maximize the opportunities available to me.

When I get stuck on a particular plan without incorporating new information, I often make mistakes. My business is growing because I’m making fewer and fewer of those mistakes—hopefully I can maintain this trend.