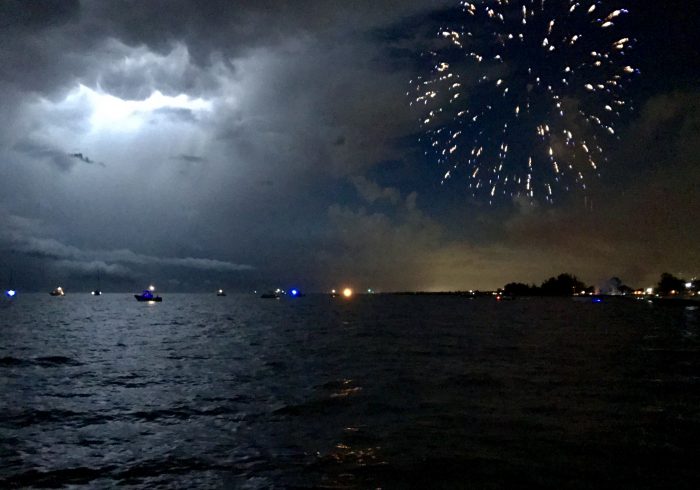 As we finished the last of the vanilla ice cream and blueberry cobbler, it began to rain. And not just a light drizzle – a pretty serious summer downpour, even by Florida standards.

We hadn’t seen this one coming on the radar and then it was right on top of us, soaking everything only 30 minutes before we were supposed to take the boat out to the Gulf to watch the fireworks.

What we had here was a classic Florida pop-up shower, which is usually a quick-hitter sort of thing. You don’t see them coming, then you get drenched for a few minutes, then they’re gone.

We had a decision to make: Go out on the boat as planned, or watch the fireworks from the porch? Although there was a pretty dark group of clouds behind us on the horizon, we decided to head out and chance it. Even if we got hit by a couple small pop-up showers, at least we’d get a great view of the fireworks. 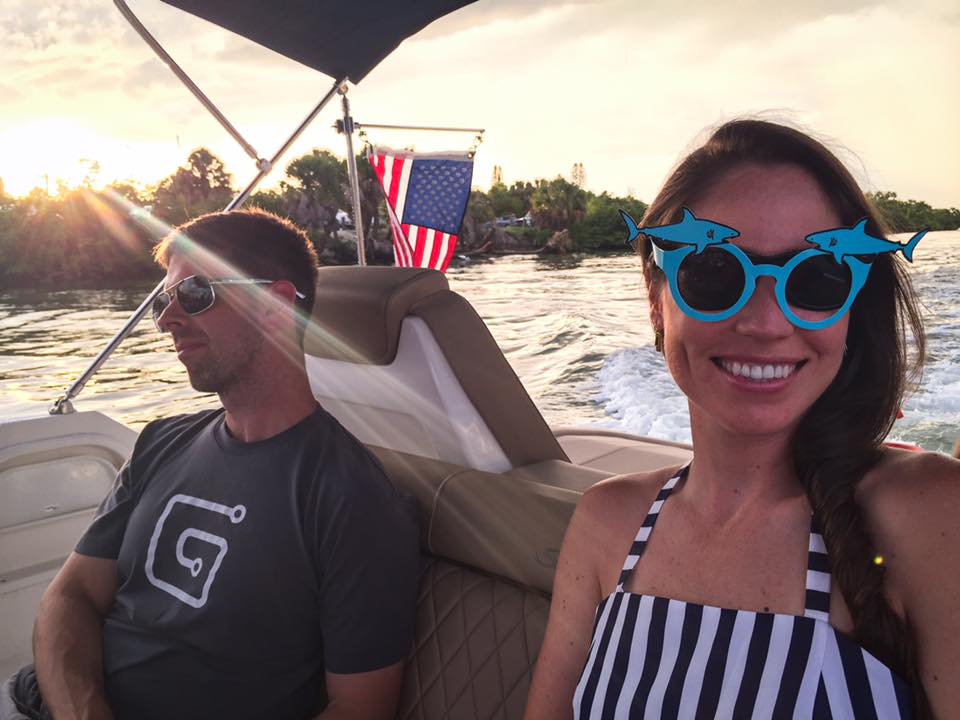 As you can see behind my friend Jenn and me, the sky wasn’t too bad as we made our way out. We barely made it out to the Gulf before they blocked the channel, and we went to our spot where we would watch the show that would begin in about 45 minutes.

But then, that dark gray storm began drifting in from the west. And we noticed another storm to the north. We started getting a little nervous: Those weren’t little pop-up storms; they looked pretty nasty.

But our intrepid captain had a plan: “I’ll shoot the gaps!” He told us how he would hop around to avoid this storm, then that one, then pop down to this other gap, then back over and we would be fine.

And then the rain started.

No problem! We would just “shoot the gaps!” So we punched it and got to the first gap. Nice! The sky was actually pretty blue and the rain stopped for a minute.

But then it started up again, so we had to try to find another gap. This time, instead of following the coast, we headed seaward. But the gap we were heading for closed, the rain got heavier and colder, and the sky got darker.

The ponchos and towels came out, albeit a little late. I was wearing cotton shorts and a t-shirt. There were not enough ponchos. Did I mention the rain was cold?

We spotted another gap and headed that way. This time, we arrived in what felt like a sort of clearing. It was dusk, so the sky above us was dark blue and calm with a few whispy clouds. But this was little solace because we were now surrounded by storms on all sides—there were no more gaps to shoot and it seemed like our present gap was closing even as we arrived.

Justin, who was huddled in a sort of parka fort on the floor of the boat, got out his iPhone 7—they’re water resistant now!—to take a look at the radar and see where our gaps went.

Sure enough, we were in a teenie-tiny gap which was literally surrounded by red storms. This was not good. Red basically means “THIS IS VERY HEAVY RAIN AND WIND! YOU DO NOT WANT TO BE OUT IN THIS STUFF!” But we were out in this stuff. On a boat. In the Gulf. At dusk.

Suddenly, there was a lot of lightning and things went from bad to worse. 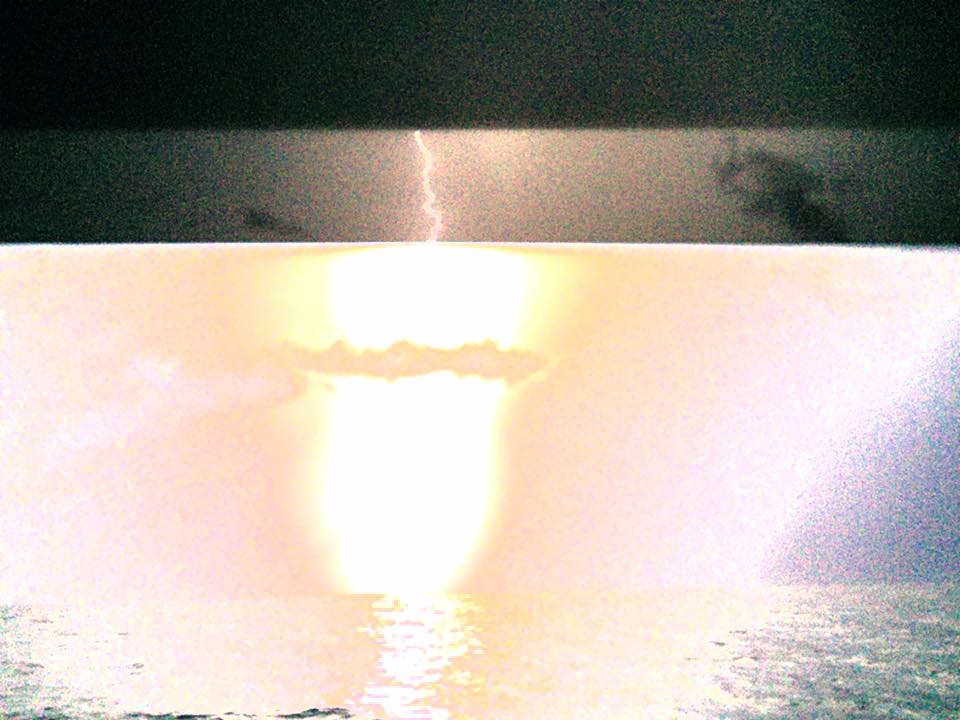 I grew up in Florida. Heavy rainstorms happen here all the time. In the summer, they happen pretty much daily. So being stuck in a rainstorm in a boat on the Gulf isn’t like FANTASTIC or anything, but it’s not too far away from what a typical Floridian experiences once every year or so as they make an afternoon run to Publix.

Of course, as a Floridian who grew up with frequent intense rainstorms and hurricanes, I also learned to have a healthy respect for lightning because it will kill you. This lightning was probably 5–10 miles away, which meant we were in striking distance.

“I think we should go south!”, Justin shouted from his parka fort as he stared at the ever-updating radar. Then he showed us the radar, which showed that things were about to get considerably worse. But maybe there was a gap down south, so we headed south.

As we were heading to our new southern destination, Justin showed us the latest radar. The area we had just evacuated was now PURPLE. This is worse than red. According to Weather Underground, we were experiencing the second-most-intense level of rain they measure. On a boat. In the gulf. At dusk. Plus there was lightning everywhere.

The rain was steady, though less intense than it had been earlier in our ordeal. But now we were literally surrounded on all by sides by dark skies and lightning.

Here’s a video of one of the bigger, more surprising strikes. You can hear our intrepid captain’s concern excitement as he and his dad marvel at Mother Nature’s fireworks as she tried to kill us.

This meant that although we were hopefully headed for a gap, we first had to head directly into a lightning storm. Still, the floorboard-parka-fort command center said to go south, so we went south.

After 10 or 15 minutes of heading into a lightning storm at full throttle, we found the gap the radar had foretold. It was near the shore, which happened to be one of the only stretches of uncolonized beach in the area. It was beautiful and eerie. The clouds had dissipated overhead, so we were in a sort of void, surrounded by lightning storms, next to an empty beach as the sky got darker.

We waited and watched the radar, hoping that no more storms would pop up and that the storm we had escaped would continue moving westward into the Gulf.

After 20 minutes or so, a few small fireworks popped just inland of us—a good sign. The gap we were in began to grow so that we could see several miles up the shore to the original position we had abandoned earlier.

We could see that the people who had stuck it out were getting absolutely hammered by an enormous storm. The sky above them was black, constantly lit by lightning strikes. As bad as our situation had been, theirs may have been worse.

More fireworks began dotting the shoreline to our north, and we consulted the radar to confirm the worst had passed. The red was all to our west, so we began creeping northward along the sleepy shore, dodging the beach’s outstretched piers as they reached for us.

Things still looked pretty bad by the channel where we naively began our journey—dark skies, lightning and rain—but then we saw some bigger fireworks that seemed like they would be part of the big show. Our technicolor lighthouse showed the way, so we pushed the throttle, heading back to our starting point.

When we finally cut the engine a few hundred yards short of the police boats and buoys that cordoned off the splash zone, we got to see not one, but two spectacular fireworks shows: In the foreground, the man-made one we had come to see; in the background, the lightning that had chased us from gap to gap, into the Gulf, then south, and finally back to the shore we followed home. 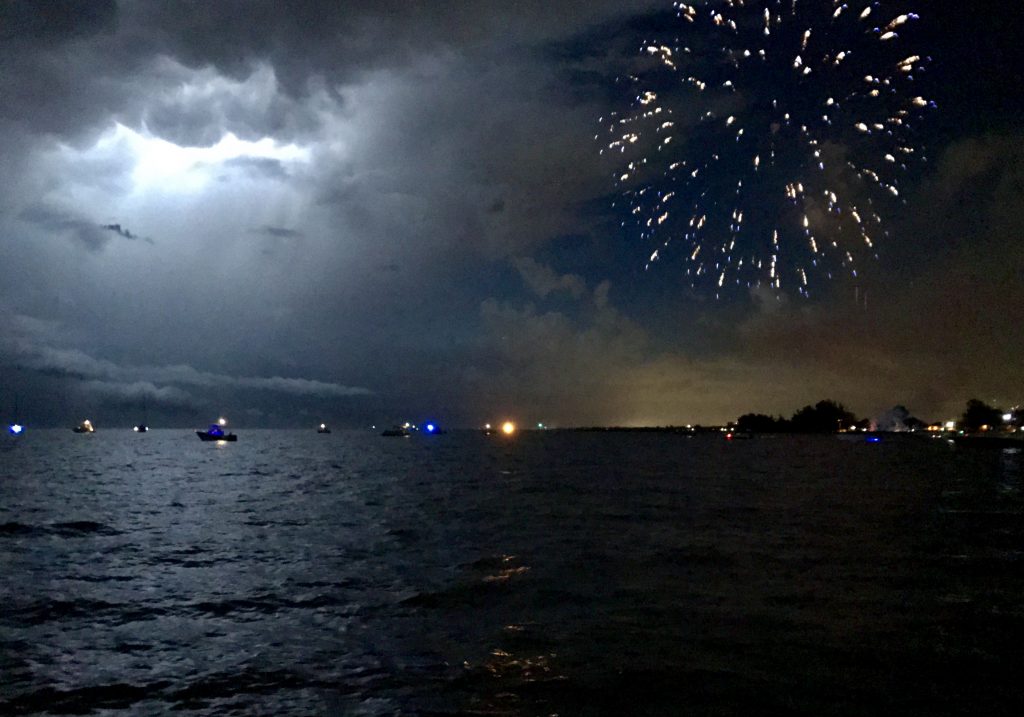