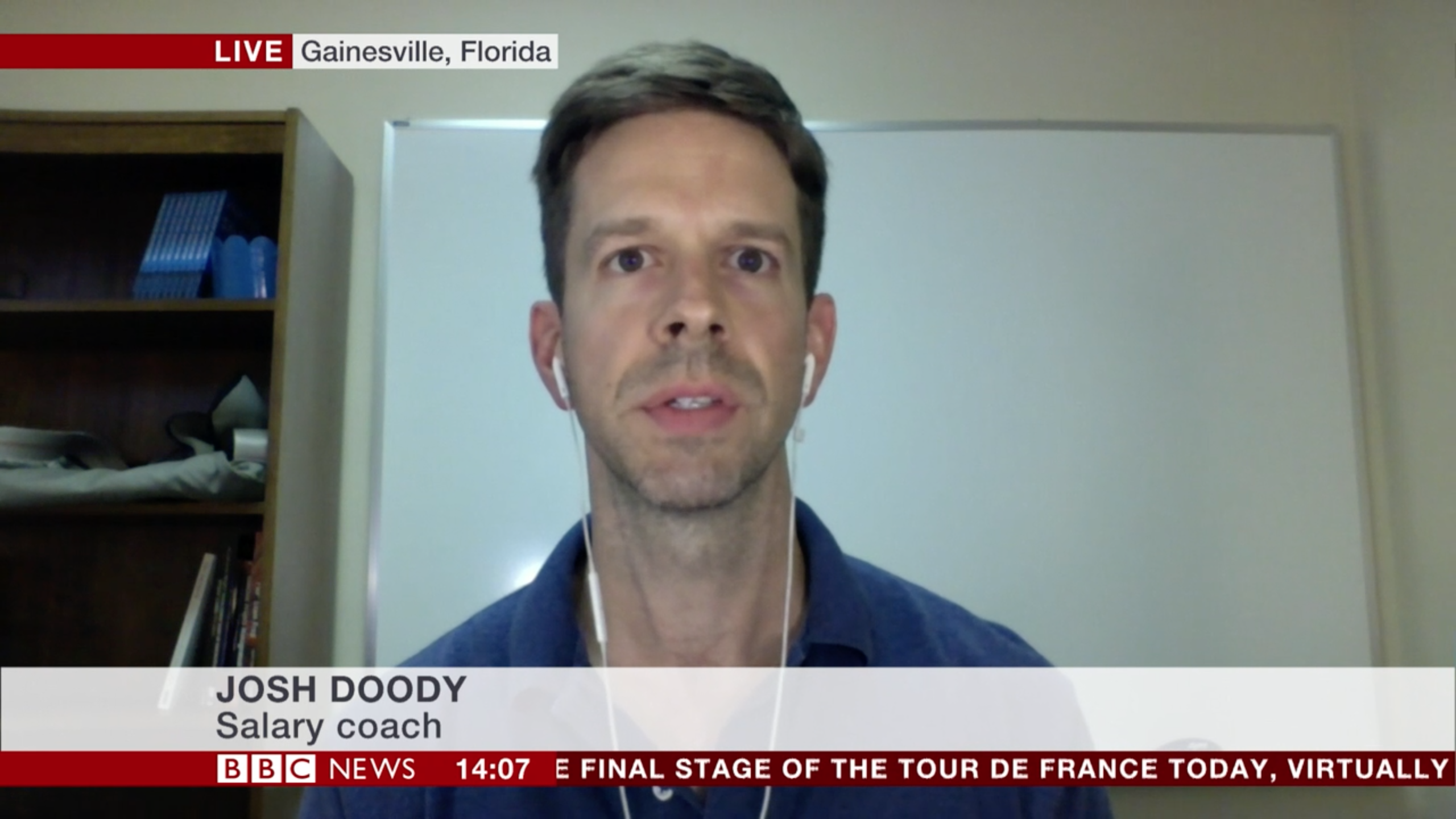 I got up and went to Starbucks like I do almost every morning. That’s where I go to get some coffee, catch up on the news (specifically, that means reading Twitter), and plan my day. I like having a routine, especially in the morning, because it reduces the number of decisions I have to make when I’m sleepy and my brain isn’t fully functional.

So I got my coffee, found a table by the window, and popped into Tweetbot to see what was happening. I saw the little dot that said I had a new mention, so I checked it.

Morning @JoshDoody any chance you might be free to talk to @BBCNewsChannel about pay negotiation in light of #bbcpay today?

That’s what I saw. The BBC? Interesting! I replied right away and we did the “follow each other so we can DM” dance.

I wrapped up coffee time and headed in to my office, which is about 2 minutes from Starbucks. It would take a few minutes for Tammi to follow me back and DM me, so I figured I might as well move to my office so I could set up for my interview.

At this moment, I wasn’t even sure what kind of interview we were talking about. Most of the time when I get this sort of request, it’s for either an email interview or a phone interview, and those usually end up published online.

So I was thinking this might be a phone interview that might be aired on TV or transcribed for quotes for online, TV, or radio use.

To be clear: I had no idea I was going on national TV soon.

Tammi DMs me her email address and lets me know that they’re on air in 45 minutes, and would I be free then?

Now I know this is a live interview. I’m still not sure if it’s audio-only or video. I’m assuming audio-only.

Tammi emails me with a summary of what they’re talking about and asks some questions to give me a sense of what sorts of thing I might be asked on the air.

She also mentions that it would be great if we could do a live interview for TV, and asks if I have Skype.

I confirm that will work and answer the questions she asked to show that I know what I’m talking about.

As an aside, I’ve found that any time I’m asked questions about my subject, giving very thorough answers is almost always the best way to go. It demonstrates my expertise and gives the asker as much information as they need so that can pare it down to whatever they were looking for. Over-delivering in this particular area has gotten me a ton of good opportunities to contribute to large outlets.

We also exchange a few more emails about logistics like my geographic location.

Meanwhile, I start setting up my office for a Live TV interview. I cleared my whiteboard, raised my laptop on a pile of books so the webcam was eye level, set up two super-cheap desk lamps I keep handy for key and fill lighting, and began testing everything to make sure it looked and sounded ok.

Tammi asks for my phone number so a producer can reach out to me to start getting ready to go on air.

I continue monkeying with my setup so it looks as professional as possible on such short notice.

A producer from the BBC News Channel calls me to confirm some details and tell me what’s going to happen.

This call lasts one minute.

I continue fiddling with technical stuff and testing things to make sure everything works. I mess with my bookshelf so it’s not totally barren. I drink water to make sure my throat isn’t dry. I fire up my lights so they can warm up in time. I talk to myself out loud a lot so my voice warms up as well (I’ve been awake for about an hour at this point, so I’m still feeling and sounding sleepy).

I log into Skype and hang out waiting for the BBC to call.

The BBC calls me on Skype. A different producer this time.

He does some basic checks to make sure everything is ok. I’m on camera now and planted in front of my laptop. I won’t move a muscle for the next 12 minutes.

I don’t see anyone on the other side, but I can hear Shaun Ley interviewing a guest and talking. There’s a commercial playing.

Shaun Ley is talking about me. Now he’s talking to me, but I can’t see him. All I see is a green dot on my MacBook, and some stars from the bright lights in my face.

Shaun asks me some questions and I answer them while I continue staring at the green dot.

Shaun and I are finished talking and a producer thanks me for my time. We disconnect on Skype and my 15 minutes is over.

In only an hour and nine minutes, I had spoken with three BBC producers over four different mediums, plus talked with Shaun Ley on Live TV.

But my time with the BBC wasn’t quite over.

@JoshDoody Hi Josh, I work at BBC Radio 5 Live. Great to see you on TV! Pls could I DM you about a potential interview tonight? Flwg you.

This one was a slower burn, but the tick-tock is still interesting.

I exchanged DMs with Sophie and sent my phone number so we could chat about the interview.

Sophie calls for an exploratory chat where she asked several questions about different aspects of salary negotiation and the gender pay disparity.

The interview would be quite a bit later in the day, so I think she was trying to get as much information as possible to enable them to ask questions that dovetailed with their programming while complementing other discussions they would have over the next several hours.

We wrap up after 16 minutes and I’m told the interview should be at 6:05 PM Eastern Time, and that they’ll call me a few minutes before that.

A BBC 5 Live producer calls to make sure everything is set up. We do some technical tests to make sure they can hear me and then I am in the queue.

I can hear Stephen Nolan talking with a Sky reporter and the conversation is a little… contentious? BBC News and Sky are competitors, so this is to be expected.

I confess I was a little nervous that I might be walking into a tricky situation, so my guard was up a bit.

The interview with the Sky reporter went a little longer than I expected, but then I could hear Stephen transitioning to our interview.

I’m on! This was a much less difficult interview logistically, but the questions were more challenging. We didn’t have as much time as I expected, but it was a good interview overall.

The interview was over, the producer thanked me for coming on, and that was it.