My friends invented a game called Trashcan Ball. It’s a mash-up of soccer, lacrosse, and basketball. You score by putting the ball in the other team’s trashcan. 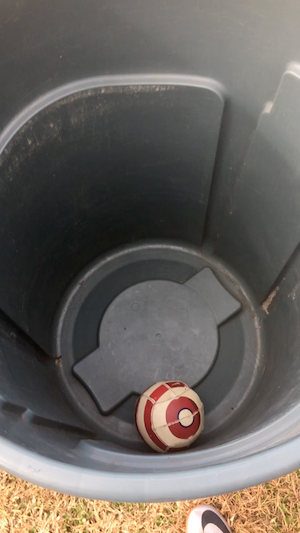 The equipment (they didn’t get too clever with the name)

You can carry the ball, throw it, or kick it, but if you get tagged while you’re holding the ball in your hand, it’s a turnover.

That’s basically all there is to it. But there also aren’t any boundaries and the game never stops moving. It’s my favorite way to work out. 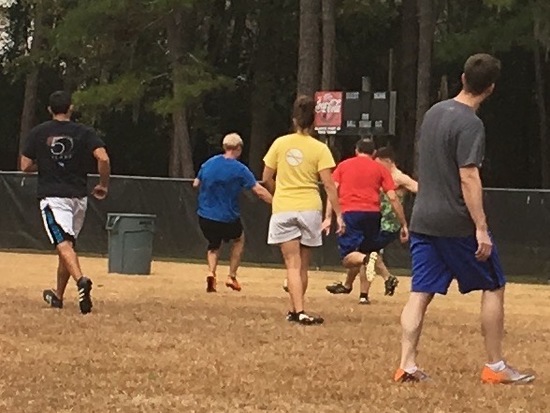 That’s me in the gray shirt

I like trashcan ball so much because it’s a very simple game to learn—I told you all the rules in one sentence—but it’s really hard to play well.

One day I made a mistake on a fast-break in a really tight game. James—one of my teammates—told me I messed it up, but I didn’t quite understand how I messed it up. I thought about that mistake a lot over the next couple days, and just couldn’t figure out the right way to run that particular play. I was stumped.

So I called James and asked him: “What am I supposed to do on that fast break?” He immediately knew the play I was talking about: “I’m ahead of the play, so you should pass it up to me as early as possible. You held it too long, and that allowed the defense to adjust and challenge our shot.”

Then I got it. I knew where I messed up and I understood fast-breaks better so I wouldn’t make similar mistakes in the future.

I couldn’t figure it out on my own, but it only took James a couple sentences to set me straight because he’s a good coach. Good coaches understand their subject and have a unique ability to help people understand the subject and get results.

My readers get results

I just finished a coaching engagement with a client who had job offers from a couple of big-name companies. He really had his eye on one of those companies, but their offer just wasn’t all that great. “How can we get them to improve this offer?”, he wanted to know.

So we went back to them and—are you ready for this?—asked them for a better offer. They improved the base salary and target bonus components by about $3,000 each, but we felt like he could still do better. So we worked together on a counter offer.

In the end, they threw in a $10,000 signing bonus to help convince him to take the job. We worked together to improve his original offer by over $16,000! He’s going to use most of it to help pay down student loans, and he and his wife could take a nice vacation this year, too.

Don’t try to figure out salary negotiation on your own. My book Fearless Salary Negotiation will be your guide.