My first job out of high school was a summer gig at a mortgage lender. They paid me $8.50 an hour to do “t-patching”, which was basically organizing boxes of mortage files so they could be scanned onto microfiche. (Yeah, this was a little while ago, but not that long ago. Even when I was doing this, I remember thinking it seemed pretty old school.) 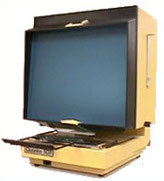 ANYWAY, that job was awful. But I figured that if I just worked hard enough, I would eventually finish all of the t-patching and they would have to give me something better to do.

I did this for about two weeks, figuring I had to be just about finished with all the t-patching so I could do something better. But before I could finish all the boxes, my boss came to me and said, “Hey, you’ve been doing a great job here. What do you think of moving up to customer service? We need help there and it pays better, but you’ll have to talk to customers on the phone.”

FINALLY! Of course I accepted, and they sent me to three weeks of training and gave me a raise to $10.25 an hour. My first raise and promotion only two weeks in!

My boss took me to meet the new team I would be working with and we passed a big closet that was full of boxes that looked just like the ones I had been working with. “What’s that?”, I asked. “Oh, those are the boxes that need t-patching.”

Then I understood. There was practically an infinite amount of t-patching to be done—I was never going to finish, even if I kept up my pace for the entire summer. If I had known that, I never would’ve worked as hard as I did. But I didn’t know that, so I worked as hard as I could to get it over with.

My boss perceived that level of work as my tyipcal output and figured I would be well suited for the grind-it-out world of the call center, where there’s a never-ending supply of work and everything is measured down to the minute. If I could get through t-patching that quickly, she figured I would be a shoe-in for the call center. (She was right!)

This is a fun story, but the truth is that I got very lucky, experiencing the dream that everyone has when they start working: “I’ll work hard, my boss will notice, and I’ll get a big promotion.”

It took me several more years to realize that’s not how it usually works. After that job, I had several others where I did great work and rarely got promoted. I eventually realized there’s more to it than working really hard—there are two steps to getting a raise.

Most bosses are just too busy to keep close tabs on your work and adjust your salary over time, so in addition to doing valuable work, you also have to help them out by keeping track of that work and presenting a strong case along with a specific request when you’re ready for a raise.

That second step—asking to be compensated for that unanticipated value—is the one I didn’t learn until later on. But it’s just as important!

You have to proactively manage your career—no one else is going to do it for you.

My book Fearless Salary Negotiation is a great next step to take control of your career. You can’t afford to NOT check it out! 😉