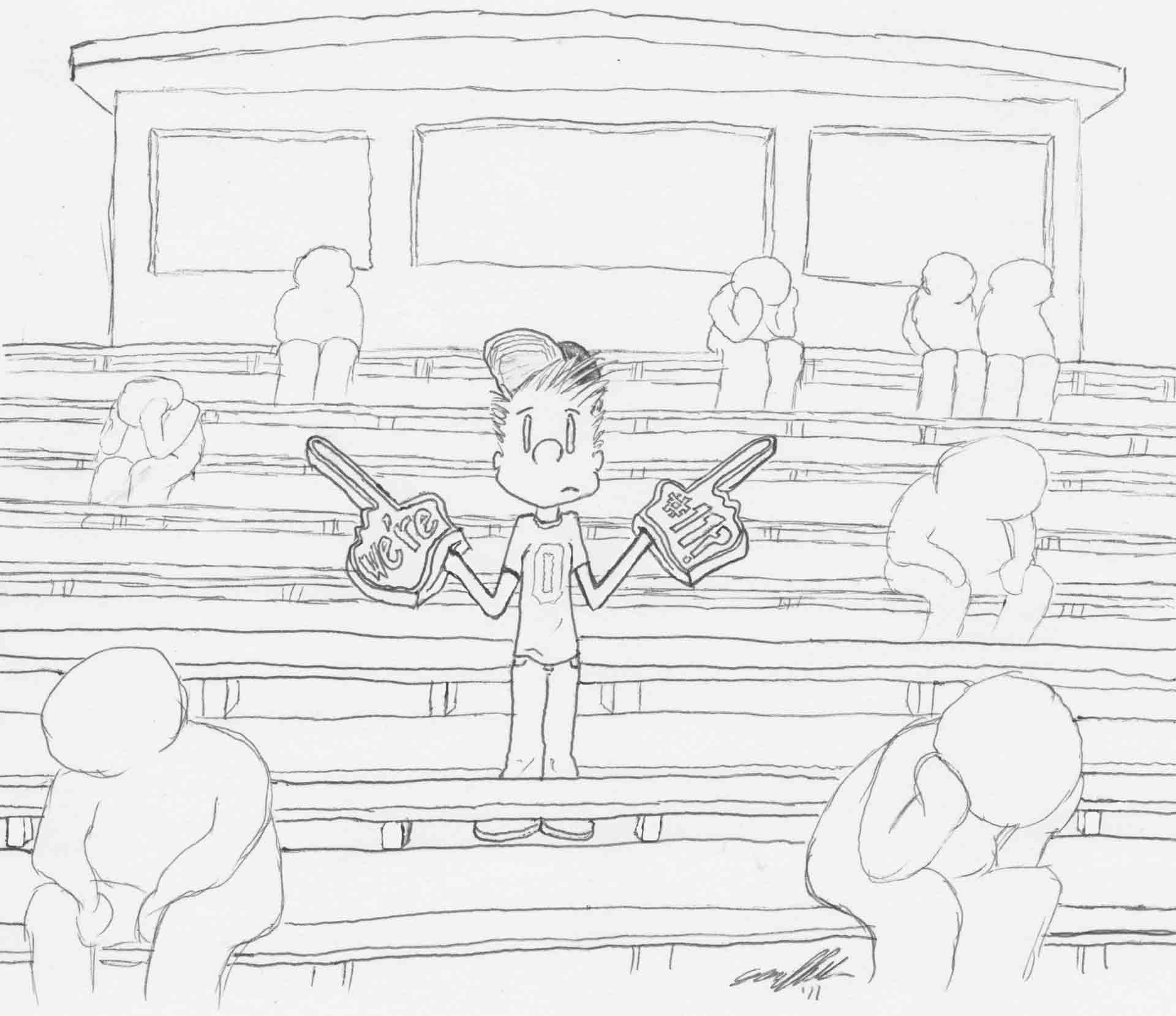 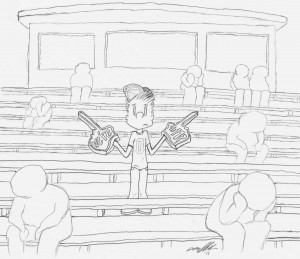 Part of the American ethos is that we should love sports, and that we should love particular sports teams. This goes all the way to the top: George W. Bush recently threw out the first pitch at a World Series game, and next March will bring hours of coverage of President Obama’s bracket for March Madness.

A good way to get a funky look is to go to a Chili’s and tell someone you “don’t follow sports.” If you’re lucky, they’ll pity you. If you’re unlucky and they’ve had a few drinks or recently seen their favorite team lose, you could be berated and publicly mocked for your lack of culture or cojonés. If you’re really unlucky, you could be punched in the face or even forced to drink a generic light beer (it’s definitely possible that I’ve been watching too much of The League lately). Only slightly less repulsive than a sports non-follower is the agnostic sports fan. “Who’s your team?” “I don’t really have a team. I just like watching the games.” He probably won’t be berated or flogged, but he’ll almost certainly hear a guffaw or see a smirk.

But among the upper crust of American society, among Die Hard Sports Fans, the most reviled group of fans may be those of the fair weather variety. Not to be confused with bandwagon fans (although they’re not mutually exclusive), the Fair Weather Fan is one who ostensibly “has a team”, but who only roots for his team when it’s doing well. Not winning Super Bowls or World Series rings recently? Then the Fair Weather Fan is nowhere to be found. He’s not off rooting for some other team, he’s just not rooting for his team since they’re no good right now.

To some sports fans, being called a fair weather fan is one of the more flagrant offenses. “I’ve been rooting for this team since they were awful! My father lived and died without ever seeing us win a ring!” He wants you to know that he has suffered. He was there when they were awful. He went to the games. He’s witnessed heartbreak. Repeatedly.

Let’s step back and look at sports objectively, as a product. The not-best way to do this is to create a character who isn’t me, but is a lot like me and speaks in the first person. So I’m going to use this device for a little bit:

Next week, we’re playing again. Yeah, I blew $63 last week on a loss and a stomach ache, but you know what? I’m going again because I’m a fan, ok? I put up another $50 for a ticket, and some more for concessions that most children could make with a dollar and some unsupervised time with a stove (No, not an Easy-Bake Oven. You can’t make authentic sports-stadium concessions in that. I’m talking about a real stove, manned by a real child.). We lose again. This one stings because I’m pretty sure some of the cheerleaders got playing time in the second half. I’m not even sure My Team is trying, ya’ dig? Now I’m out $120-something and I’m starting to get an ulcer from all the stress and bad food I’ve been eating. In a moment of clarity, I look at our record for the past two seasons: we have two wins. That doesn’t seem too good. I’m a big fan of My Team and everything, but two wins seems… maybe a little on the weak side?

Ok. We have another game in two weeks. I’ll need to work overtime and do a Miracle Cleanse to get ready for the game, but I can do it. I can get the money together and hopefully my gut will be back to normal by then. But you know what? I’ll be honest here: I’m having second thoughts about this one. I’m not sure I want to spend a bunch of money on a game we’re probably going to lose. I haven’t even talked about how I have to spend the whole day getting ready for the game, going to the game, getting home from the game. It’s a big investment, and I’m just not sure I want to make that investment again right now. Maybe if we were winning these games, but man we’re losing almost every game.

Why are you shouting at me? I think you just got some spit in my eye. You seem pretty worked up. Are you ok? What does that giant vein in your forehead mean? I’m just trying to explain what’s going through my head as I decide whether I want to go to this next game.

So that poor guy (who, like I said, isn’t me at all) just got chewed out for not being excited to pony up $60 to go see his favorite sports team lose again. That fella is dangerously close to sliding down the slippery slope that is Fair Weather Fandom, which is probably really miserable even when compared to the Island of Misfit Toys or the infamous Ugly Island.

Here’s the thing about fair weather fans: they may be much smarter than full-time, rain-or-shine, been-there-through-the-hard-times fans. You want efficiency? They are it. We’d never know that by listening to sports commentators or reading sports writers or talking to our other sports-fan friends. Still, it’s true.

Most of the time, we’re very discerning about how we spend our money. If we buy something and it sucks, we don’t buy it again. Or maybe we buy it just on more time to make sure it really was that bad. But that’s it. If it’s bad again, we’re done buying that thing. Unless it’s a ticket to a sporting event. In that case, we proudly buy our ticket and tell our friends that we were there through the lean times. It’s a badge of honor to tell stories about going to the games we were guaranteed to lose. “I went to every single game in 1975. We didn’t even have a quarterback that year, and our team’s contract stated they weren’t allowed to play more than one series in the second half!” That guy was really dedicated to wasting a bunch of time and money on something.

When fans decide their Favorite Sports Team sucks and they’re not going to keep spending money and time watching them suck, it isn’t the fans that are broken. The product is broken. It’s ok to make a rational decision to not waste money to go to games that probably won’t be any fun. That’s the smart thing to do. The more I think about it, the more I think that “Fair Weather Fan” isn’t a scarlet letter, it’s the mark of a rational, thinking person who has better things to do than dump money and time into a company that’s selling an inferior product.

So how did we get here? It’s one thing to point out that being a fair weather fan isn’t as stupid as we’ve made it out to be. But why do we hate fair weather fans? Because sports marketing is just that good. The entire sports industry (the same industry that brought you multi-day draft coverage, dedicated sports news networks, entire panels of people paid to discuss a “fantasy” version of a sport, and wall-to-wall coverage of player-versus-owner business negotiations) has successfully convinced us that we’re not buying a product. Sports are ethereal, a gift sent down from Mount Olympus to entertain man and make his life better. You don’t know who won the NBA Finals in 2005? That’s probably because you’re just not living a very satisfying and complete life. You’re working the full day on Monday? That’s only because your life is terrible and you haven’t found the wonderful world of Monday Night Football. What are you going to talk about on Tuesday? Your life or something? Your kids? That’s so lame, man!

Sure, you have to pay money to go see sports, but that money isn’t buying you a product, it’s buying you an experience. You get to hang with your friends, tailgate, drink yourself sideways, and tell stories the next Monday at work. Sure, there happens to be a team playing on the field, but that’s totally ancillary and almost coincidental. What you’re really buying is an experience, a collective opportunity to create a mass-memory that’s shared by you and everyone else who went to or watched that particular game. The irony, of course, is you could create your own memories for free. No, they wouldn’t be memories (fuzzy as they may be) of tailgating and football games, but they’d be a whole lot cheaper. And yet the geniuses (I’m not even being sarcastic there) who market sports to Americans have convinced us to pay for the privilege of creating memories with our friends, often at crummy sporting events.

Here’s the real kicker, though: I’ve watched all the Gator Football games this season. I watched some of them by myself at home. I just dropped $50 to go watch the Gators get killed by Alabama in The Swamp, and I might go to the Florida/Georgia game again this year. I’ve been to a lot of Florida sporting events. I’ve probably been to something like 60 football games, an SEC Championship game, some bowl games, dozens of Gator Basketball games, a Final Four and even some Florida baseball games. I don’t even like baseball. One year, I traveled back to Gainesville from Dallas just to watch the Gators in the Final Four with my friends… on TV! Why? I was making memories and stuff, but I also don’t want to be called a fair weather fan. I don’t really want to go watch us lose games when we’re bad (and we’re bad at football this year), but I don’t want to miss anything either. I’m fully aware that the idea of the Fair Weather Fan is totally manufactured and contrived, and yet I still don’t want to be called a fair weather fan. That’s totally nuts. The Fair Weather Fan really is a triumph of sports marketing; it transcends all reason and rationality.

But it is what it is, and I can’t wait for the Gator Basketball season to get started. You know we’re ranked Pre-season #10, right? We could be pretty good this year.

* Special thanks to Sean Nyffeler for his great illustration. You should read his stuff over at Popcorn Noises.