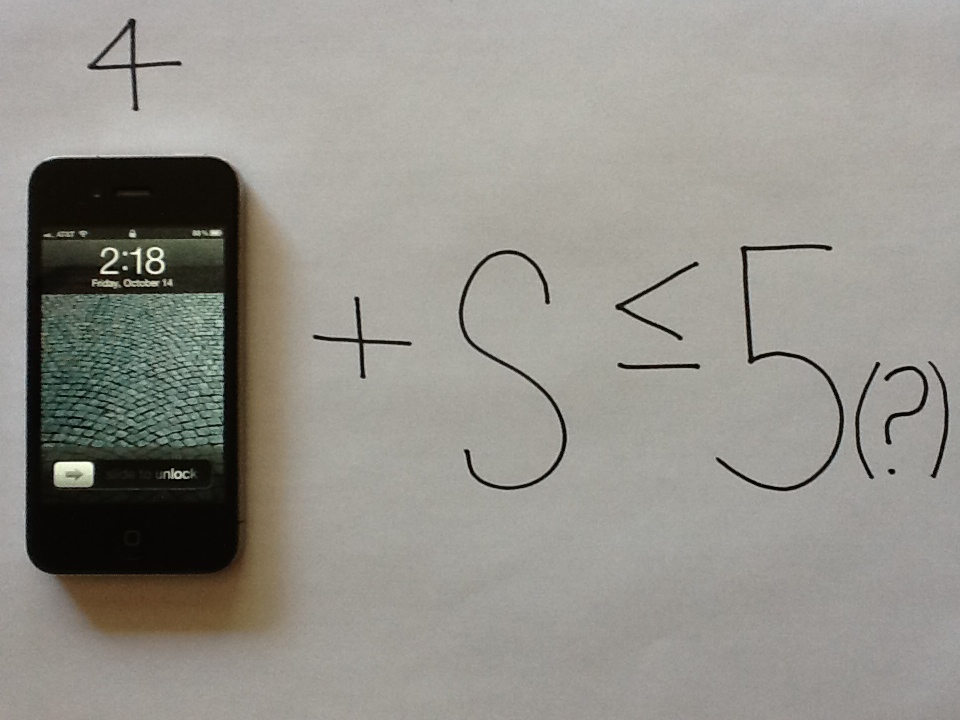 Back in June, I wrote about the WWDC 2011 Keynote and how I was ok with it. The basic idea was that I liked Apple’s focus on software since I felt their hardware was already far and away the best hardware out there. Of course, I was mostly focused on the iPhone and most of that post brings everything back to iPhone. Even after my thumbs-up on iOS 5 and the other software improvements they announced (iCloud, e.g.), I was still holding out hope that we might see an iPhone 5 this year. At the time, I was expecting it in September, and now we know that the new iPhone was announced the first week in October.

So how do I feel about the iPhone 4S? Mostly good and maybe a little bit disappointed.

I think Siri is really, really cool. It’s also sort of necessary for the grand Apple revolution I predicted in 2009. I was starting to get a little worried that Apple took a shot at hands-free interaction with Voice Control, and then gave up when it wasn’t a smash hit. I’m glad they’re launching Siri and I think it’ll be a major feature of most hardware in the future.

I’ve already written about how much I like the stuff they’re doing in iOS 5. I like it a lot so far, and I plan to write a bit more about it in a separate post.

Many of the iPhone 4S updates are actually hardware–faster processor, more flash memory, better camera (for still and video), better antenna and potentially faster GSM data speeds–but the phone itself looks the same as the iPhone 4. I’ve said a few times that I am constantly impressed with the look and feel of the iPhone 4 (the phone itself and its screen). Over a year after I got it, I would still occasionally look at it and think, “Man, that’s an incredible looking phone.” It just looks good, and I think it’s the best looking smartphone on the market (even now).

I am constantly surprised at the viewing angle and clarity of the Retina display, and I’m frequently grossed out by the terrible screens on some of the giant Android phones. The other day, I saw someone texting on an iPhone and their screen looked terrible. I thought, “Woah. Why’s that iPhone’s screen so yellow and washed out?!” It turned out it was an Android phone (the texting interface on Android and iPhone are very similar) with a terrible screen. Yes, some phones have a larger screen, but their resolution is often the same as or less than a Retina display, the viewing angle is terrible and the colors are just all wrong. With smartphone screens, I’m just not convinced that bigger is better. I’d still take the iPhone 4’s Retina display over any of the 4″+ Android phones.

Still, I confess I was hoping to see a sexy new iPhone 5 announced last week. A bigger Retina display would be really awesome. But bigger Retina displays are hard to make, and they’re expensive, and nobody else is selling them yet. I understand why Apple chose not to go that route yet.

All in all, I’m almost totally satisfied with the iPhone 4S. I would’ve liked a bigger Retina display, and it would’ve been cool to have NFC for payments and such. But by and large I think the new 4S has pretty much everything I was hoping for: a 64GB option, faster processor, faster data, Siri and iOS 5. I still think iPhone is the best phone out there, and I think Apple is making enough improvements with the iPhone 4S that it will continue to be the best phone for the next year. I think Apple is wisely focused on software this year because that’s where they can make big gains on the competition. By this time next year, the software and hardware on all higher-end smartphones will start to look the same, and then Apple will release the iPhone 5 with a bigger Retina display, more speed, NFC and some other bells and whistles that will once again leave its competitors in the dust. Since the iMac, Apple has been moving slow and steady, consistently beating the competition and out-innovating. That’s what they’re doing with the iPhone 4S, and I think their strategy is the right one.