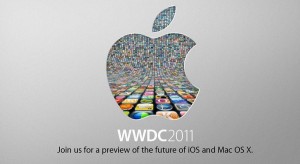 The annual WWDC Keynote is a pretty big deal for Apple fanboys like me. Apple typically makes several big announcements throughout the year, but this is usually the big announcement. (Maybe I’m biased because iPhone and iOS are my favorite Apple products.) It’s typically pretty easy to anticipate what’s coming, but this year’s keynote seemed different. No one really seemed to know what to expect. What we got was iOS 5, iCloud and Lion, but no new hardware. In case you missed it, here are some links to help you catch up:

The conspicuous omission this year was a new iPhone. It looks like we’ll be waiting until September this year, and that’s about two months longer than most people want to wait. A lot of people are pretty frustrated with this. I’m not because, as a single device, the iPhone 4 is still the best smartphone there is. As a single package, its Retina display, look and feel, specs and its functionality, can outshine any other smartphone on the market right now. Android fanboys and Apple haters will disagree, but the bottom line is Apple is still selling a ton of iPhone 4s because people love it.

That said, a lack of iPhone announcement at WWDC isn’t a definitive statement that there won’t be a new iPhone soon. WWDC is a developer’s conference, after all – they’re focused primarily on software and then on hardware.

iCloud is pretty cool, if a little late

The only hardware tweak I’d really like for iPhone is more storage, but Apple is addressing that indirectly by introducing iCloud. I want more storage because I have more music than my phone can hold. Of course, there’s no way I can listen to 32GB of music at once, but I’d rather not have to decide what to sync and what to leave behind. It’s also a little annoying to have to try to keep free space for videos, new podcasts and voice memos. But once iCloud is up and running, I won’t really have to worry about that anymore. I can use iCloud plus iTunes Match for most of my music, leaving the rest of my iPhone 4’s storage free for the other stuff.

Major OS updates on the way with iOS 5

So the iPhone hardware is not really what needs the boost. But the software could use some modernization and that’s where Apple is focusing. They’ve built such a big lead in the smartphone hardware war that they can afford to skip (or at least delay) a hardware refresh cycle to focus on major software improvements. And major software improvements are on the way in iOS 5. They’re revamping notifications, adding Over The Air (OTA) software updates, multi-device syncing via the cloud, deeply integrating Twitter and making other improvements that will make iOS 5 one of the best (possibly the best) mobile operating systems out there.

My iPhone has been Jailbroken for about eight months now. Here are the major reasons I’m jailbroken in order of importance to me:

iOS 5 addresses most of these. Tethering has already been addressed by Apple in iOS 4, and my main issue with this is that AT&T wants to continue charging a premium for the service (so this isn’t on Apple). Notifications are being specifically addressed in iOS 5 (Apple even hired Peter Hajas, who designed MobileNotifier), and they’re sort of addressing texting with the notifications updates. So most of my major frustrations with iOS are either being addressed by Apple in iOS 5 or are out of Apple’s control (tethering).

So, all in all, I was pretty happy with what we got at WWDC 2011. And I admit I’m still crossing my fingers for a new iPhone in September.